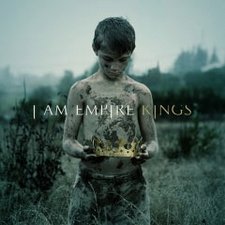 I Am Empire
Kings

Throughout 2010, Tooth & Nail records signed a new crop of artists consisting of Hyland, Icon For Hire, Swimming With Dolphins, Rocky Loves Emily, and I Am Empire. The first of these to release a full-length album on the label is I Am Empire whose debut project is titled Kings.

The band brings a high-energy rock style which sounds like a blend of Disciple, Bride, The Wedding, and High Flight Society. Though the foundation of the album is more rock than metal or screamo, throughout the album are intense guitar solos, portions of big bass, and recurrent screaming vocals. Lead singer Austin Lyons reigns in several of the choruses with clean vocals, but much of Kings features Lyons' whiney voice bringing down the songs. The ballads "Take Me Away" and "It's Not Fair" often have a southern aspect to them, but much of the emotion, which could have been transferred to the listener, is lessened by the whiney vocals.

Driven by "Brain Damage," To The Moon" and "The Elevator," the album isn't short of effective rock tunes full of passion. However, the electric guitar stanzas in every bridge of nearly every up-tempo song on the project come off as more as a distracting force than a strengthening one. Also, considering I Am Empire's more powerful rock tracks, it's unclear how serious the band wants to be taken as a rock group. At times, the band seems to waffle between delivering focused rock music and throwing in unnecessary stylistic expressions. Both the "Ha ha ha" in the second verse of "Saints And Sinners" and the seemingly lost guitar solos on "Foxhole" hinder the effectiveness of both songs.

Much of Kings is Lyons' outlet to vent the experiences and outcomes (both good and of growing up without his biological father). A lot anger and frustration surfaces repeatedly on the album (especially on "Heart Attack" and "Saints And Sinners"), but Lyons says his anger is justified because reconciliation and forgiveness are also major themes throughout the album. He brings up the issue of his father leaving his family on "Hammers And Anvils," as well as more vividly on the final track, "It's Not Fair." The former includes the lyrics "Oh it's hope that has embraced me/and my God who won't forsake me/sweet Jesus you're amazing/you save me every single time I fall down."

In addition, "The Elevator" acts as a non-descriptive anthem, and "You're A Fake" appears to be a call for redemption. Even amidst odd but genre-appropriate metaphors, "Brain Damage" does indicate that we as believers are the light against the darkness and those who would try to deceive the world. On the other hand, the lines "Throw your life away/throw it to the moon/there is nothing more to say/your drug is on display" by itself may cause some listeners to scratch their heads.

The creative album art, the dramatic song titles, and the overall hype leading to the release of Kings all promised an explosive, in-your-face, hard rock album. And that, in essence, is what you have here. There are plenty of songs to pump your fist to, but the fiery, unpredictable lead vocals and the wild guitar blasts may be more than fans of Pillar or Thousand Foot Krutch are willing to bargain for. There is also a lot of angst which may stop some listeners in their tracks, but in the end, the themes of redemption shine through. Despite some musical issues, the hybrid that is I Am Empire has offered a debut worth checking out, and has indicated that they are a band to watch in the Tooth & Nail family.

I Am Empire has been a favorite in the indie circle for the past few years, and it was seemingly only a matter of time before a record label would pick them up. With a devoted fanbase leading into their debut record as a signed band, Kings looks destined to make waves this winter as Tooth & Nail's inaugural release for 2011. Lyrically, IAE does an effective job of keeping things both optimistic and refreshingly spiritual (especially the bold "Hammers & Anvils"). The music itself, although proficient, just simply doesn't stand out in many significant ways. While there's some rather impressive guitar work here and there, both electrically ("Saints & Sinners," "The Elevator") and acoustically ("Take Me Away," "It's Not Fair"), there's very little ground broken throughout the album's duration. With a mishmash of the sounds of almost every rock band T&N's ever signed, the only particularly distinctive factor found in Kings is the vocals. Austin Lyons majors on a flamboyant, sometimes squeaky style that, while succeeding at being unique, can get a little obnoxious on some cuts. IAE's overall sound would be strengthened with a better-defined rock approach that's all their own as well as a more purposeful application of Lyons' screamy (but potential-filled) tendencies. While Kings isn't a particularly revolutionary project, the average T&N fan won't be too disappointed with what I Am Empire has offered here, and despite its shortcomings, Kings indeed carries the kind of catchy tunes that could reign in the minds of many listeners well into 2011. - Roger Gelwicks, 1/21/11