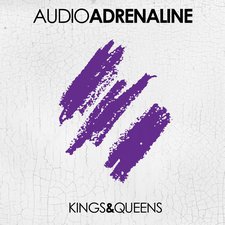 The average music listener would be hard pressed to find someone who doesn't like nostalgia. Every fan has certain artists that come to mind from their earlier days of music listening, as music takes a formative role in each individual, shaping preferences and life experiences in a definite lens. All philosophy aside, when a beloved band (or in this case, brand) resurges to create something fresh, old and new fans alike can only maintain innate interest on what's to come. Audio Adrenaline is one such band, and Kings & Queens is the resulting album.

For those who have been living under a proverbial rock for the last several months, Audio Adrenaline is back. Save for original bassist Will McGinniss, this is a completely different band: Jason Walker (Know Hope Collective) on keys, Bleach's Jared Byers on drums, Dave Ghazarian on guitar (of Superchick and Church of Rhythm fame), and most famously, Kevin Max on the mic. With all these powers combined, this version of Audio A has crafted ten new songs of material for a cohesive project, but what is a fan to make of this incarnation?

From the opening synths of the opening track "He Moves You Move" (which is easily the weakest track of the album), any bit of hope a fan held out for a pure continuation of the past is dashed. But indeed, in the same vein as the Newsboys' recent, well-documented insurgence of veteran talent, it's impossible to resist comparing this "version" of Audio Adrenaline to the CCM pioneers of yore. With only McGinniss on board from the original incarnation (which is still one more founding member than the Newsboys can boast), this just isn't the Audio A that fans remember. But nor should it be. While the current lineup continues to tour under the Audio Adrenaline name and perform classic Audio Adrenaline songs at every show, this is simply another band altogether, a star-studded supergroup of sorts, and should be regarded as such. Contrary expectations may be difficult to unseed, but the sooner a fan adjusts, the better.

Though Kings & Queens opens with a kitschy pop track that simply doesn't belong with the rest of the pack, the album picks it up quite a bit with the title track and the rest of the album, showcasing talented songwriting and expert musicianship that listeners should understandably expect from an accomplished lineup. Kevin Max's vocals are back in full form, and though it's initially odd to hear his distinctive vocals lying on top of a poppy soundscape (in contrast to the alternative-influenced musings of his illustrious solo career), his classic vibrato is a welcomed and fitting addition to the band's concept. He holds nothing back on tracks such as "Believer," "Change My Name," and "Fire Never Sleeps," and he's clearly comfortable in the role, even if some listeners may not buy in right away.

As previously alluded to, Kings & Queens is a pop/rock album in every sense. The guitars are clean and serve a supporting role rather than a leading one, and the keys sheen the entire project to a polished finish. It's easy to get on board with the fun bounce behind songs like "King of the Comebacks" and "Seeker," but some fans could be surprised at the lack of crunchy, gritty guitar parts that made the old Audio both successful and memorable. From a songwriting standpoint, it's a full plate of CCM songwriters like Seth Mosley, Juan Otero, and even Delirious?'s Martin Smith taking duties, but several writing credits from Max and Mark Stuart (who also lands a rare, but very welcomed, vocal spot on "King of the Comebacks") come up to the surface as well.

The problem with this miscellany of songwriters, however, is that the album feels like ten unrelated tracks on the same album and less like a cohesive body. If there is an overall lyrical theme behind the project, it's subtle at best, and the band lacks the written voice to make the album their own. At the moment, it appears that a group of friends put an album together as a one-off project rather than a collective group exercising their talents collaboratively for a purposeful artistic statement. Granted, this is the industry's best rendition of pop rock in recent memory, but Audio Adrenaline will grow so much more as a new group when they explore their options and make their distinct mark in their musical landscape. To be fair, several tracks take advantage of the band's status as a new group to explore themes of coming to terms with God's plan. "Change My Name" finds Max saying, "Everywhere I went people knew my name/written on my face were the scars of fame/I was known for the pride deep inside of me/but you knew the man I was born to be." Only a band in Audio A's position can release songs like these and have the same punch, but they shouldn't bank on this novelty status for very long.

Early on, Kings & Queens grabbed the role of the most historic album to drop in 2013, and thankfully, it largely delivers. Audio Adrenaline's currently lineup still have a lot of work to do to build a unique identity as a new band, and though Kings & Queens is a solid first attempt to reach that goal, they can afford to take larger artistic risks in the near future. The band must build upon the present, not solely on the past, if they are to become an industry juggernaut. The old Audio A left monolithic shoes to fill upon their exit from the scene in 2007, but it is clearly an ongoing process with Kings & Queens as the decisive first step. It's all systems go on one big experiment, but this band of brothers can surely rise to the occasion.

When Audio Adrenaline played its last show as a band in April, 2007--due largely to the deterioration of frontman Mark Stuart's vocals--most fans were certain that the band was finished. But soon, Stuart and fellow founding member Will McGinniss hit the road again with a special tour of unplugged renditions of AudioA favorites and some stories from their experiences through the years. But in 2012, following the success of replacing Aussie Peter Furler with the very American Michael Tait as vocalist for the Newsboys, the brains behind that swap posed a new concept: resurrecting Audio Adrenaline with another former member of dc Talk at the microphone: Kevin Max. Now, just a few months later, Audio Adrenaline has unleashed Kings and Queens; ten all-new songs (i.e. no "Jesus Freak" or popular worship covers here) with a distinct AudioA vibe, but with Max's famous vibratto at the helm. The end result is a mind bender as Kevin puts his voice to the poppiest songs of his career and carries the flag for one of CCM's top pop rock acts of the last two decades. From the "Beautiful"-esque opener "He Moves You Move" to that anthemic funky rocker you would expect from the band in "King Of The Comebacks" (which features an oh-so bittersweet, and sort of ironic, guest appearance by Mark Stuart himself), Kings and Queens is Audio Adrenaline with a new voice for a new time. It's looking to be one of the best pop rock records in recent memory, but diehard fans who can't imagine any other vocalist besides Stuart (or even Tyler Burkum who shared the role with him during the band's later years), may need to view this as merely a 'same name, different band' project (which is mostly the boat that this reviewer is in). The only thing that may be missing from Kings and Queens would be some of the more raw rock leanings the band has displayed through most of their albums. Kings and Queens takes more of a Don't Censor Me approach with a more polished pop sound. So, band name aside, for the CCM realm, this just may be a match made in heaven. I'm eager to see how this new identity of Audio Adrenaline continues to bloom. - John DiBiase, 1/31/13; Expanded 3/10/13