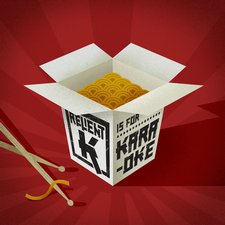 Relient K
K Is For Karaoke

Here lies Relient K's "full" K is for Karaoke release. The first half was available in June, but now, finally, we are presented with the finished product. I will make no bones about my dissatisfaction with the way this thing wasn't just released all together the first time, but that's neither here nor there. All of this to say, I'll let my review of the first half of the project stand on its own. Even though the songs previously released are now interspersed throughout the full K is for Karaoke (clever...), it isn't like these songs form some kind of cohesive picture; they're covers. Thus, I'm only going to talk about the new songs here, and I'll conclude with thoughts on the collection as a whole.

This time around, the line-up include covers from The Wallflowers, Chicago, Cake, Third Eye Blind, Stone Temple Pilots, Toto, and Nada Surf. There are no twenty-first century covers on the back half of K is for Karaoke, with a heavy emphasis on the 90s in its place. I grew up in that latter era, but I was listening to Christian tunes, so I've been becoming familiar with both versions of all of these songs all at the same time. With that said, Relient K has done a great job of modernizing these songs -- staying true to the source material, while switching them up enough to keep those unfamiliar with these 90s tracks interested throughout. It's a testament to Relient K's work here that I am just today finally getting around to listening to the original tracks I had not before heard. And covers usually just make me want to go listen to the source. The K boys have my kudos.

In fact, I'd say these new tracks are a little stronger than the first half released in June. The Wallflowers and Chicago both get respectful and fun nods, while Cake's "The Distance" is the "Here Comes My Girl" of this full collection- a song so different from Relient K's style, the guys don't really even make an attempt at "Relient fi-K-tion," they just go for broke and belt it out. And it works like a charm. Toto's "Africa" has a lot of heart behind it, and feels very inspired. The Third Eye Blind and Nada Surf tracks are a littl more mellow, but still a lot of fun, and Stone Temple Pilots' "Intersate Love Song" gets a much needed redo (And honestly gets me pondering what Relient K covering Nickelback would sound like...? Good? Bad? Just not as terrible?).

As far as cover albums go, this one is about as good as they are going to come. Relient K is a very talented band, and one that knows how to take things not so seriously from time to time and just have some fun. The latter half just released is stronger than the first half, but the first half still has its gems. All together, these are fourteen tracks no Relient K fan should be without, and even if you never really hopped on the RK train- it's still a lot of fun. Now with this album out of the way, we can all focus on what's really important: That follow up to Forget and Not Slow Down. And now we have some good tunes to help get us there.

Earlier this summer we were given the first half of a collection of covers from the fellas of the illustrious Relient K. The Is for Karaoke EP featured covers that could be expected and some that were surprising. With the full album release, they are finishing what they started. Pulling from multiple genres and decades, they chose some excellent tracks. However, not everyone is wired for the life of a karaoke superstar. Here, I will only focus on the seven new tracks in the karaoke saga. Some of the new additions to the cover collection are excellent; "Motorcycle Driveby" and "One Headlight" are given a great Relient K twist while keeping the integrity of the song intact. Sticking closer to their respective original recordings are "You're The Inspiration" and "Africa." The cheesy yet enjoyable percussion, piano, and synth pay homage to the artists of old while still adding some modern flair. These songs will definitely have people singing along and gaining appreciation for the music produced over the last 30 years.

Unfortunately, it becomes tiring to hear cover after cover after cover. While Relient K is known for integrating these songs in their performances, that's what makes their live shows so special. If they were mixed into a collection of originals then it might be easier to digest, but all together, it's not something to listen to over and over again. The final decision must reside with the listener, but for the non-karaoke superstar, it's an album that is easy to pass on. - Ryan Barbee, 9/29/11