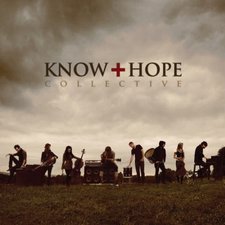 When it comes to Christian music, Audio Adrenaline does not fall into the category of "forgotten artists." If anything, they are living legends! With such great albums as Bloom, Underdog, and Lift, they helped pave the way for good Christian pop rock music. In 2007, when Audio A made the sad transition out of active duty, it was extremely difficult to accept but at the same time, they gave everyone an "adios" to remember. However, it seems that God had different ideas. Mark Stuart and Will McGinniss are back in the action with a new project known as the Know Hope Collective. Some fans might not be sure how to approach this album. Does it live up to AA standards? Should they even be compared to each other? That's for the listener to decide, but here's what I think

The album is filled with great original worship songs. An excellent stand out is the opener "Attention." It begins with Stuart's unmistakable vocals but then transitions to different vocalists throughout - making the "collective" very true. The lyrics are simple but beautiful as they sing, "Speak, you have my attention. You have my attention. You have my attention, Lord." While the sound may be reminiscent of some modern worship, the songs contain an honest transparency that is hard to find. The same could be said of the song "Build Us Back" as it recognizes the need for God to redeem us from our depraved state. An excellent song that isn't about us being perfect but God being perfect (and incidentally, Stuart penned the song which was first recorded by Newsboys last year before KHC).

"Just To Be Here" is an extremely God-centered song that very truthfully recognizes the fear of God, singing, "We hide our face from you and you open our eyes." Thankfully, the melody and music are very fresh as the song is easy to follow and could easily be sung during a Sunday morning service. "Sanctuary" continues with that corporate worship setting as the holy God we serve chooses to make us His cathedral. Like I said before, it has a modern sound but the honesty is so rare. These songs acknowledge our brokenness while at the same time realize that our all-perfect God chooses to use His imperfect creation.

As a cherry on top, some classic Audio A songs made the cut as well: "Hands and Feet," "Ocean Floor," and "Good Life." Each song has received an overhaul while still honoring their integrity. "Good Life" received one of the more notable changes as it begins softly in the chorus with piano. In all truth, it made the depth of the song even greater, as it feels like more of a ballad to Jesus. Audio fans should be pleased.

Let me be real, I was a little worried when I heard about this album. I was nervous that it was going to be another typical worship album or that I was going to fall into the rut of comparing it to previous Audio Adrenaline releases. However, I was surprised by what I received. Accompanying the music, on the enhanced version, Mark Stuart and Will McGinniss share some of their stories from the road. These stories are worth the extra money! They make this album have such deep meaning. They're full of confession, testimony, and exhortation. If I hadn't listened to the stories, the songs would not have been as hard hitting as they were. They are really the meat and potatoes of the album.

One thing is for sure: Know Hope Collective is not Audio Adrenaline. But what they are is a group of people who want to share the love of God through stories, music, and good conversation. I look forward to hearing what else God will do through this group of worshipers. Stuart and McGinniss, while being the more popular members, truly don't highlight themselves but let the Collective function as a whole. Audio A fans and everyone: this worship album is a great way to start the year! It might not be what you expect but it might be the thing that you need.