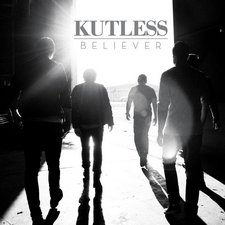 By now, we all know who Kutless is. Believer marks ten years since the release of the band's self-titled debut, and during that time we have heard the group's music featured on rock and worship compilations. By this time, fans usually know whether they are going to get more of a rock album (Hearts Of The Innocent and To Know That You're Alive) or more of a worship project (Strong Tower and It Is Well). However, because Kutless is coming off a release of a worship album, does that mean Believer is a return to their harder sound?

Well, Believer starts off swinging with "If It Ends Today," which does possess an ambitious display of guitar work, and, halfway through the album, another fast-paced, rock oriented track, "Need" makes an appearance. Neither song brings out the level of passion or intensity that other Kutless albums have offered, though. So if fans were hoping for something on Believer that sounds like "Your Touch," "Shut Me Out," Million Dollar Man," "The Feeling" or "To Know That You're Alive," they will be disappointed. As an aside, Lifehouse fans will almost certainly enjoy "This Is Love."

The rest of the album delivers varying levels of pop rock. Most of it lacks creativity, but there are a few moments when Kutless delivers something more than generic radio pop ("Gravity" and "I'm With You"). However, Kutless uses their inspirational sound on the worship leaning tracks to win over new listeners rather than an original one. The title track does have enough emotional firepower to stand out, but "Come Back Home" and "Even If" fail to stand out.

The lyrics will seem incredible or incredibly average depending on the listener. One contemporary worship fan would easily walk away after hearing the first four songs and marvel at the solidity of Kutless's messages on: our hopeless state without Christ, giving our all in the realization that we can never give enough, or God's faithfulness even when we don't understand rough circumstances. Another fan could just as easily walk away wondering "haven't we heard all this before?"

Although Kutless accurately portrays the Lord's love for us in "Come Back Home" and "This Is Love" (the former goes over the parable of the prodigal son while the latter discusses the last hours before and during Christ's crucifixion), the themes they picked to sing about have been covered frequently enough. However, despite that and a couple of cliché moments and cheesy lyrics ("If It Ends Today" and "Gravity"), the majority of Believer's lyrics are more than solid.

I have mixed feelings about Kutless' latest record. On one hand, I'm disappointed that Kutless shows little or no imagination when they crafted their harder music, and they seem to be cementing their reputation as more of a radio pop rock/worship band than a thoughtful rock group with an alternative edge. On the other hand, Believer is a very balanced pop rock project that has all the necessary ingredients for a successful contemporary release. Although I would certainty prefer to spin previous Kutless albums first, Believer is honed almost perfectly for their target audience.

Believer finds veteran rockers Kutless in fine form and straddles the divide between loud rock and introspective pop capably. Opening number "If It Ends Today" sports a dynamic lead guitar line that conjures up early U2 and welds it to one of Kutless' trademark shout-along choruses. Power ballad "Hero" is a lighter-waving affair that unfortunately shares its title with about a thousand other songs. Nevertheless, the tune hits that sweet spot between sappy and uninspired. "I'm With You," "Believer" and "Carry Me To The Cross" also tread these same waters, and the presence of too many of these types of songs starts to mute the overall tone of the project, especially when they are back-loaded at the end of the album.

And therein lies the problem with Kutless' latest effort. While all the songs are sturdy and ready for the radio, few rise to "memorable" status. It's as if there were too many hands in the making of it, like a Hollywood blockbuster sequel. The pressure to produce a blockbuster album can be felt in almost every song, and while they deliver the goods mostly, there is a calculated feel to the whole undertaking. - 2/16/12, Tincan Caldwell of Jesusfreakhideout.com