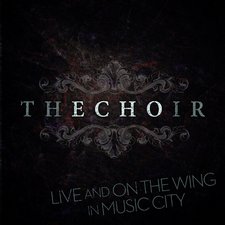 The Choir
LIVE and ON the WING in Music City

The Choir, who quietly celebrated their 30th year together this year, have a few live albums to their credit (1997's Let It Fly and 2000's Live At Cornerstone), but none covers the scope and sheer sonic breadth of their catalog and live prowess like the new Live And On The Wing In Music City.

In all fairness, The Choir's swirly, truly 'alternative' sound has been notoriously difficult to capture live and translate back on an album. But after so much time with the same lineup, Steve Hindalong and friends felt the time had come to make their definitive live album, the one that would document their unique sound and celebrate the long friendships the band has shared.

Kicking off with the band's best, late period rocker "Burning Like The Midnight Sun" (the title track of their fantastic 2010 record about friendship), Derri Daugherty sings what could be the band's mission statement, "I'm not going down behind the mountain / baby I'm here to stay / I'm burning like the midnight sun / burning like the midnight sun." The guitars crunch and whirl around, and Daugherty (who owns one of the most beautiful voices you're likely to hear anywhere) sings his heart out. It's a great opener, and sets the bar high for the rest of the set.

The two best songs from the band's latest album, Shadow Weaver, come next, and "White Knuckles" sounds exactly what a song about hard fought sobriety should sound like--desperate yet determined. Drummer and chief lyricist Steve Hindalong is quite open about his struggles with alcohol, and "White Knuckles" and "What You Think I Am" (about the dual nature of every person you meet) growl and rock like the struggle that is inside every person between the old man and the new. "Think I Am" is perhaps The Choir's most menacing rocker (even the saxophone sounds ominous) and its inclusion here is almost mandatory.

The set list next dedicates the next four tracks to what is perhaps The Choir's best album, 1987's Chase The Kangaroo. "Sad Face" is a melodic, yet melancholy number about the sadness of losing a child to miscarriage, and is a textbook example of how to deal with a tragically common event with grace and subtlety. The lyrics "there's a tiny spirit in a world above / cradled so sweetly in our father's love / you don't have to cry / but there's something in my eye / a sad face is good for the heart / and right now I don't understand" show how terrific a wordsmith Hindalong is, dealing with the toughest of subjects with a soft hand and gentle wit. Christine Glass's vocal counterpoint is a terrific addition to an all-time great (if tragically under heard) song. "Consider," "Children Of Time" and "Clouds" are all a master's class on how to create mood and atmosphere with instruments, and how to weave your faith into a statement that resonates and provokes thought. Both "Children Of Time" and "Clouds" deal with doubt in a revenant way, and should be required listening to any young Christian band out there. Chase The Kangaroo is arguably one of the best albums in the history of Christian music, and thankfully it's been getting a bit of a second look in the last few years.

The highlights keep rolling on Live And On The Wing; "Cross That River" is a seven-minute epic that has a build worthy of U2 and a message of hope in troubled times ("you cross that river / one rock at a time") and "We All Know" is a gentle reminder to love one another because we all know how suffering feels.

After a few choice cuts from across their album spectrum (including three epic tracks from 1990's Circleslide), the album ends with The Choir's beloved worship song, "Beautiful Scandalous Night." This is an excellent album closer, bringing the focus back to The One who gives us the very tools we use to honor and glorify Him.

The Choir has inspired such bands as Jars Of Clay, Switchfoot and Third Day, and without their trailblazing, alternative work, marrying beautiful sounds with creativity, heart and spiritual insight, there might not be a blueprint for alternative Christian music of any stripe. Live And On The Wing In Music City is an epic document of one band's journey through the years, trying to marry the truths of heaven and the realities of earth.