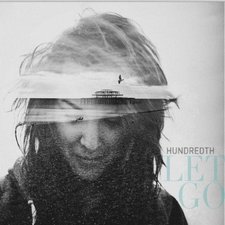 It's so very hard to find good Christian hardcore. There's something really soothing about hearing a message of God's encouragement via your favourite style of heavy music. And if melodic hardcore is your choice outlet, then you no doubt enjoyed Hundredth's 2010 debut When Will We Surrender. With them being easily the most capable and talented offering in Christian hardcore, I was very excited to hear their newest project, Let Go, which has come to us only a year and a half after their debut.

One reason this new album came a little early might be the unexpected filling of the band's emotional reservoir. Though details are sparse, the inspiration for Let Go is said to stem from the death of seven of the band's friends while they were recently on tour. A tragedy to be sure, but Let Go is not about lingering in the grief, but rather moving past it. In the stellar opener "Weathered Town," we hear Chadwick Johnson's compelling and harmonizing screams, "Holding onto the past each day leaves me empty, wanting everything to be the way it was. There are better days to come, I just have toI have to let go," as they mix with expertly crafted melodies dancing in harmony. "Carry On" especially has one of the most encouraging slews of tear-jerking one-liners I've ever heard, "Lift your head from the soil; lift your head from the toil. Breathe in life and move forward."

The next heavy theme is that of battling complacency in a corrupted and broken world, which was addressed in length throughout When Will We Surrender. "I challenge this generation to expand our minds and seek truth for ourselves. I challenge this generation to not buy into the dreams set forth by man," Johnson screams in "We Can Take Them All;" The words are brutally honest. "Humane" mocks society's proud tendency to "blindly pledge to a flag, when justice lies in a King," but encourages the listener to "raise the banner of love above all flags. Over any nation that vies our allegiance."

You have to take extra care appreciating a lyrically strong album. Understand that for the artist, it's about so much more than just writing new music, and that translates into the music so eagerly when you know what you're hearing is all about. Packed with emotion and encouraging one-liners like in "Remain & Sustain" ("I was only holding myself back from being all that I can"), the simple chord progression becomes inspiring. When you can see what the music means to the musicians playing it, you'll find that it means more to yourself as well. It becomes more than music. It becomes a friend when you're alone. When Will We Surrender aided me through a tough time in my life, and I have no doubt that Let Go will be a bright candle for many lost in the dark places right now. "The world I see is full of things that should not beRemember, hope is a reality."

"Monumental Part I" sends further encouragement straight from the mouth of one of the most inspiring men of faith the world has ever seen: C.S. Lewis. In a clip from a BBC broadcasted radio sermon, Lewis speaks on how originality and respect come to those who aren't looking for it, "Give up yourself, and you will find your real self. Lose your life, and you will save it." Let Go comes to a head in "Restless." As the haunting guitar harmonies usher in the bitter line "I'm not okay. I can't find stability," I find myself getting legitimately choked up. Hawkboy's Cody Bonnette shares his voice as the music lulls, then all discretion is tossed as the album explodes in an emotional crescendo. "Am I jaded to the point where I can't see all of the beauty Your hands made, the world surrounding me? I'm scared of what has come and what is to be. My heavy heart. The Earth will cover me," and I just want to let go.

The album could end here in my taste, but it goes on with "Soul," encouraging once more ("I'm rising up, reminding myself: dark is the absence of light."), before ending dubiously with a short clip of The Smith's "There Is A Light That Never Goes Out," seemingly closing with that exact reminder. Yet after a four minute wait in silence, their not-so-hidden rendition of Johnny Cash's Nine Inch Nail's cover "Hurt" begins, and ends. Again, we remember the loss the band members experienced, and this resolution becomes painfully appropriate for Let Go. It is unfortunate though, that after so much encouragement, they would end on a negative note. "I will let you down. I will make you hurt," are the last words we hear.

Strictly speaking, there is little musical progression from When Will We Surrender, but when they debuted on such a marvellous scale, a follow-up is nothing to sneeze at. That is my only complaint. Their sound is still fantastic, still as polished as last year. And yet, the melodies may be layered and delivered even more satisfactorily than last time around. Guitarist Alex Blackwell's clean vocals ring warmly on the occasions they have to shine ("Remain & Sustain," specifically). Bassist and drummer JP Gressman and Matt Koontz, respectively, work among the harmonies to lay down the beat, easily changing tempo when needed, but never stealing the show. Gressman's beats are simple but always varied and transitioning pleasantly. I respect that he doesn't rely on the crutch of the hardcore beats, but when he uses them, they are magnificently mingled with harmonized chord progression.

Let Go takes on a much more sombre tone, however. If it doesn't sound much different than their previous album, then it certainly feels different. Every time I analyze an album, I either become very tired of it by the end, or more engrossed in it than upon initial listening. You cannot take for granted the value of an album that intertwines the lyrics with the music at such a level. I encourage everyone who has the chance to hear Let Go in its entirety to also read through the expertly crafted words. The experience completely transcends what only the music itself can provide.