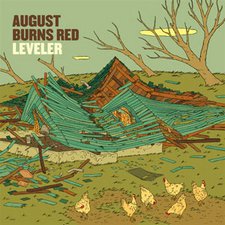 To be given the opportunity to critique the fourth studio album of the Lancaster behemoths August Burns Red, I feel incredibly privileged. But honestly, I don't know where else to start than the beginning. If you've been a fan since then, you already know that the journey that they've taken since their debut on Solid State, Thrill Seeker, has been a long uphill climb that has left no two identical footprints. Since exiting the brooding, chaotic foothills of Thrill Seeker, not only have they kept ascending the mountain, but they've also found sturdier footing. Once embracing jagged rocks called "Barbarian" and "Back Burner," they soon took to the colour of sprouting grasses around smoothed boulders like "White Washed" and "Meddler." Yet unsatisfied, as the mountain towers ever higher, they have found a plateau ripe with undiscovered fruit.

So you want to know if Leveler has lived up to the hype it's been building for nearly a year now? Well, if you were expecting an August Burns Red album, you may be momentarily dazed by what you hear. It's no secret that ABR has never been typical of the metal scene. Since winning all of us over with raw brutality in 2005, each consecutive release has seen exponential growth in range of experimentation. If the band even knows how high the expectations have become, I don't think they really care. They are simply not interested in doing the same things twice.

"Empire" is the perfect introduction to this fundamental truth. It represents perfectly everything that has changed since Constellations. The passion ABR is known for has risen to a new high, and it is instantly clear how each member of the band has improved, pushing the envelope in every direction. I was struck immediately by the fantastic bass tone. It's a stellar development considering the creativity Dustin Davidson contributes. Rather than piggybacking the treble, he carves his own harmonious path through the rabble. The more we can hear of him, the better.

It seems that as the band expands their ability, they also expand their interest in applying foreign styles, as you will see they are eager to experiment in "Internal Cannon," where the song drops off into a Latin/Merengue rift at least twice. Whatever sideshow their eagerness for progressive metal exposes you to, they always mix in equal parts classic ABR. In this case, it's a reminder of JB Brubaker and Brent Rambler's fondness for harmonized noodling (a habit JB picked up in the very first years). "Divisions" keeps the surprises coming. While raw and gritty are nothing new to fans, the track is particularly interesting because of Jake Luhrs' vocal performance. In the darkest song on the album, Luhrs gives what is easily his most passionate performance to date, absolutely shredding his vocal chords. Luhrs has never had a narrow vocal range, but the way he successfully pushes (and expands) his own boundaries with every album is what makes him one of the best in the genre.

In the same vein of improvement, Davidson lends so much more of his voice to August Burns Red than we've ever heard before. You can take "Carpe Diem" as the best example. It's a mellow adventure featuring Luhrs and Davidson trading screams, duet style, for a sizeable chunk of its length. Instead of merely filling in the higher pitches that Luhrs previously couldn't, Davidson took more of the stage this time around, and it sounds great! As does Brubaker's explosion of solos and licks. In Constellations, the few solos he attempted were experimental at best, but Leveler is practically littered with innovative noodling. He doesn't stop there though. His dedication to fresh ideas finds a home in tracks like "Carpe Diem" and "Internal Cannon," the former of which sounds suspiciously like blue grass steel guitar.

The stranger breaks from the face-melting come mostly in the form of post-rock interludes peppered throughout, which may throw off (or even put off) a few listeners, but demonstrate the range of collective musicianship they are capable of. Despite all the new ground covered, the experimentation and the progressive melody, they still sound like August Burns Red. How does that make sense? The answer is the lifeblood that is the sound of ABR: the beautiful limbs of drummer Matt Greiner. His unique everpresence locks in the signature flavour that the fans yearn for when the game changes. It sounds strange when you say it, but even Greiner has improved immensely since Thrill Seeker.

You don't get a soundtrack to curb-stomping from Leveler like you might from say, The Devil Wears Prada or Impending Doom. August Burns Red departs from the mono-emotional form that metal has taken and turns the archetype on its head. Their new album is really an artisan's palette of emotional themes. "Divisions" oozes sorrow and regret over the loss of a friend, "We are the weak. The pain is a devourer. It's devouring me," "I made you carry the casket of an innocent man when it should have been me." Genuine frustration seeps from Luhrs' voice in "Cutting the Ties," "It'd be so easy to take the easy way out." But he offers the listener encouragement, "I know silence is a frustrating answer when all you want is a sign. Patience is a virtue. You will be revived." But it's not just the words; you can see the colour of each emotion in the music. "Salt and Light" is an enormous, blindingly bright track that starts out jazzy and ends in a beautiful chorus of praise, "I am the harbinger, not the author of these timeless words. Led by the comforter, I sing to you. We sing for you!" Unflinching lyrics in the face of rising popularity garners orders of respect in our escalating age of sell-outs.

Even in the heavier songs, like "Empire," "Poor Millionaire" and the title track, the urge to tear down some drywall is not overshadowed by the huge grin that will accompany you. By writing music that is so ambiguous in the metal scene, they've become extremely approachable. And when the most important lyrics are the easiest to understand, the message is relatable by most as well.

The hot coals of Thrill Seeker were left to hiss straight out of the furnace, but after six years of cooling, refining, and chiselling we have a stoic gem in Leveler. You may not see this album coming, but I'll be surprised if you find something to complain about. If you need music that'll only enhance your best frown, you've got more than enough options within the metal genre; if you want endless breakdowns, you've got Messengers. But if you want a colour-coded, genre-warping monster in flawless Jason Suecof production, pick up Leveler. With significant improvement from every member, new sounds and old sounds alike (there's a Thrill Seeker vibe at the end of "Poor Millionaire"), I am very interested to see where August Burns Red goes from here.

I recently put August Burns Red's Leveler in my ear and I haven't taken it out for anything else. This fourth release is another notch in the victory stick for the Lancaster foursome. The expected heavy breakdowns, off-meter riffage, and wicked leads are all here, and I happily noted the return of what I call "the big giant boom that signifies another breakdown" that was conspicuously missing from Constellations.

As with each successive ABR release, Leveler treads new territory. Most tracks are more melodic, and there's even a quasi-salsa bridge on one song. The band (and their producers) definitely know what they're about. There are some spots where, as a fan, I expected songs to go somewhere discordant, unexpected, with the key and meter changes from older albums, but they just didn't, dissolving into melodic bridges or standard breakdowns.

None of that is to disparage this effort: Leveler is rock solid and a great listening experience, making a completely worthy addition to the ABR curriculum vitae. New fans will have a lot to chew on here, and those of us who've been rockin' since Thrill Seeker are thrilled about a new release. This band is among the elite who are shaping metalcore, and Leveler shows no signs of winding down. - Sean Lex, 6/20/11