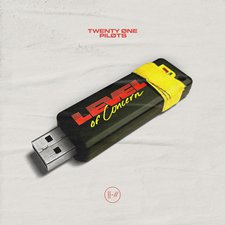 
Pop mega-duo Twenty One Pilots has reached the moment in their meteoric rise where they can seem to do no wrong. Their rabid fanbase, who is known as The Clique, gobble up everything they release, launching every single and album toward millions of streams and views. After the breakout smash-album Blurryface in 2015, and master world-building follow-up Trench in 2018, fans and detractors alike were left to wonder what was next. Now that both guys are married and starting a family, like Tyler Joseph, would they slow down? Perhaps approach making music differently, or maybe even take a long break?

Thankfully, the T0P fellas saw fit to lean into the moment (worldwide pandemic) and share a simple, yet delightfully hooky pop tune for the masses. Challenged by his mother to write a song about the times, Joseph chose to write about the power of togetherness wrapped up within a love song to his wife. In essence, the song works on two "levels." Though Tyler has concerns about the world with "panic on the brain," and he sees "the world has gone insane, he also seems to have a low level of concern over his marital relationship. Later, he coyly asks wife Jenna, "would you be my little quarantine?" It's sweet, even if it lacks the depth and lyrical layers of previous work. However, this atypical simplicity does not make for a throwaway song. In fact, both the approach and the message of the song itself is a lesson in "reading the room." Instead of a typically dense and elaborate concept album, they choose to meet the present need. That need being a reassurance that we're all in this together and it's our reliance on each other that will be what gets us through it.

The tune itself was said by Tyler to be the first he has ever begun on the electric guitar, and the pairing of a happier tone with a danceable groove is a great call to keep things focused on a lighter note. At this current time, it seems to be a standalone song not connected to any longer form project being worked on, but who knows? These guys are full of surprises. For now, we can turn up this head-bopping, toe-tapping tune in our personal quarantine bunkers while we dream of better days to come. This reviewer, for one, is grateful for a song to remind him of the power of friendship and togetherness, all the while lifting my spirits. "Level of Concern" is a must for fans of the band, as well as those in need of an upbeat reminder to be there for each other in our time of need.

Amidst a disconcerting, worldwide pandemic, which has thrown just about everyone's way of life out of whack, pop megastars twenty one pilots have released a very timely new single, "Level of Concern," accompanied by an out-of-character-but-appreciated personal, and social-distanced, music video. The single seems to reflect the duo's own attempts at making sense of the world's current state, as frontman Tyler Joseph takes a very melodic pop approach to the track. As he sings about his elevated "level of concern," there's something catchy and comforting about this song, and it couldn't have come at a better time. If you're a fan of the band--for more than just trying to decipher their LOST-level of cryptic storytelling--this track is a must. - 4/19/20 John DiBiase