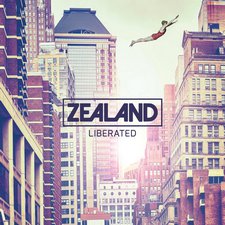 
For longtime fans of Christian artist Phil Joel, Zealand's debut LP, Liberated, will be a welcome arrival. Originally gaining notability as a key member of the Newsboys throughout much of the Peter Furler era, Joel didn't take long to find his voice. His vocals and skill as a bassist added much to the band, and his solo albums only further exhibited his versatility as a songwriter, performer, and all-around musician.

When the news broke in 2015 that Joel was returning to the music scene with a worship project, reactions were a little mixed. While exciting, worship projects can very easily fall into mediocrity, especially within today's oversaturated market. (As a side note, the last-minute decision to drop "worship" from the band's name was extremely tasteful.) Thankfully, Zealand's first EP was far from a disappointment, although it was too short to gauge their overall trajectory. Now nearly a decade since Joel's last solo album, Zealand breaks the silence with an exceptional, though imperfect, project.

Kicking off with "Spirit Sing," the band delivers a song which grows in power and potency with each subsequent listen. At first, it may seem like par for the course with other worship songs, but a closer examination reveals an intricacy and sincerity uncommon for the genre, including lyrically ("You spoke everything into motion / echoing in anything that breathes / Your sound is stirring like the ocean / whispering down deep inside of me / deep calls out to deep / oh, You make my spirit sing"). Many of the songs have such subtle touches, which can likely be attributed to Joel's background as a bassist. The title track, "Liberated," is an odd duck; its general familiarity both helps and hinders its resonance (I address this tension more towards the end of the review).

"Center of It All" is a middling worship offering, yet "Deeper Water" carries a hefty weight and is one of the album's gems. Its lyrics are simple and devout ("You've been shaking the trees / You've been burning the leaves / You've been breaking our rules / and we're ok with it / take us to the deeper water / falling headlong into Your love") with its melody and tone reminiscent of Joel's time in the Newsboys.

"Beloved" is a fun track which portrays the overall sound the band is hoping to emanate. Some portions of it are admirable, while others are less distinguished. Liberated slows down with "Still," an intimate, solid piece which sits quite nicely on the album. "Land of the Living" is a fervent and expressive worship song, and probably the one on the album which can most easily be reproduced in other worship settings. Unfortunately, it does at times feel like a bit of a mashup of other worship songs you've likely heard before. "End of the World" is an above average song filled with ups and downs, but is easily deserving of its place on the album. "Sanctuary" is relaxed, peaceful, and a good offering, but is not necessarily the most memorable track on Liberated.

However, anytime a song starts off with lines such as "hey, you there, with the big gun, whatcha gonna do? / where you gonna run when it all hits the fan? / and you know it will," you can be sure you're in for an interesting experience. "Garden's on Fire" is easily the album's best offering, and a prime example of skilled musicians exercising restraint. It is not a standard CCM worship track, but rather Joel at his best, seamlessly weaving together an alt-pop piece along with some R&B elements. Its lyrics are quirky and poignant ("And now the garden's on fire, the trees are burning up outside / I wanna run to the rescue, but I get tied up inside") and the catchy melody and instrumentation pulls punches ever so tastefully. Unfortunately, the song is nearly over by the time the listener has fully embraced such a radical shift in style. The final chorus, as well as the coda, serve as the perfect palate cleanser and send-off for Phil Joel and the band: "And now the garden's on fire, still the river's running through / it's never over when it's over; we can all be made new / life here, tell me how you came to be here? / is this where your journey ends or is this how your life begins?"

Joel is a passionate worshipper; the energy and sincerity of his live performances resonate even through these recordings. This creates an uncommon problem, however. Many of these tracks are designed only to function as "worship songs" in traditional CCM theaters. Other artists will not easily be able to cover them, nor will Sunday morning worship leaders make these songs work for congregational singing. Unfortunately, it's almost guaranteed that they will try. This is especially true with "Liberated," "Center of It All," "Beloved," and "Spirit Sing."

Liberated contains several exceptional worship songs, but also boasts several moments where Phil Joel is seen fitting perfectly into his element. These moments rekindle memories of some of Joel's best works, and it is indeed curious listening to hear him pair together two very different musical sides. Ultimately, Zealand is off to a fantastic start, and other than a few murky vibes that could have been tweaked, their debut LP is well worth the purchase.

Though Zealand's Liberated is infectious, professional, and a cut above most worship bands out there, this album never quite rises to a level higher than above average. Most of the tracks deal in overused metaphors and fail to present a different flavor from other praise songs in spite of the intoxicating music backing them. A few more tunes like the title track, "Sanctuary" and "Garden's On Fire," would have benefited the album greatly. Still, it is a solid praise album and worth checking out if you need music to pick your spirits up. - 2/10/18 John Underdown