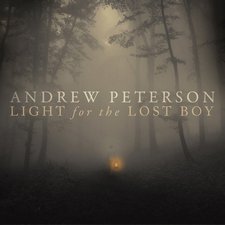 Andrew Peterson has been long regarded one of Christian music's finest, though somewhat lesser-known songwriters. Longtime listeners have come to expect a satisfying experience in every record, with gentle pop folk stylings and a focus on introspective, poetic songwriting. Eventually though, expectations are meant to be pushed, and his eighth studio release, Light for the Lost Boy, does just that, giving his classic sound a fresh approach without sacrificing the lyrical depth fans have come to love.

In some ways, Peterson's music has always been about a love of words. Over the years since his debut, he has proven to be a master at bringing transcendent truth and the stuff of earth together, but this time around, the music plays just as great a role in bringing his stories to life. Like the mist-shrouded woods of the cover art, Light... invokes soundscapes both mysterious and inviting.

In less than a minute, "Come Back Soon" shows this isn't just another pretty AP folk album. The atmosphere is weighty and dark, as minor key piano and soft percussion lead the way into a harrowing image: "My son he saw as the animal died in the jaws of dog as the river ran by / and said come back soon..." The effect is haunting; a lonely electric guitar and thundering drumming build to a crescendo ready to split open with longing. And that's just the first song.

Part of this expansive new sound is perhaps owed to the addition of Cason Cooley to the production team with longtime collaborators Ben Shive and Andy Gullahorn. Drummer Will Chapman of Caleb also adds a unique signature, an intense drum style that seems more atmospheric indie than folky songwriter. As for the general sound, think Bon Iver's swirling soundscapes, an influence that subtly gives "Shine Your Light on Me" its hushed atmosphere, or the spacious, Peter Gabriel-style pop of the closer, "Don't You Want to Thank Someone."

And yet, as strange as those comparisons are for Peterson, Light... never strays too far from sounding like him. "Rest Easy" is a bright pop-folk tune that most recalls his previous work. "The Voice of Jesus," with sweet harmony vocals by Peterson's daughter Skye, waltzes into the middle. Some of the best moments are saved for the second half: the emotional stories of "Shine Your Light on Me," "Carry the Fire," which somehow defies description beyond "epic," and "You'll Find Your Way," a deceptively bright song with a stirring call to "keep to the old roads."

Though the music plays a bigger role, his trademark lyricism isn't taking a backseat to studio experimentation. In fact, the music only enhances some powerful, literate songwriting. He draws from an esteemed crowd of literary and theological references -- think Peter Pan, The Road, The Yearling, Tolkein, and N.T. Wright. All of the songs are tied together by an image of a little boy lost in the woods and a universal ache for a resurrected world. Again, the opening track sets the tone: "Every death is a question mark / At the end of the book of a beating heart / And the answer's scrawled on the silent dark... we cannot breathe with these broken lungs / So we kick in the womb and we beg to be born."

For all the aching, "Don't You Want to Thank Someone" ends the album in childlike wonder and hope. It's ten minutes of beautiful imagery and honest wrestling, and in the end at least points to the question mark's answer: "Maybe it's a better thing / To be more than merely innocent / But to be broken and redeemed by love / And maybe this whole world is bent / But it's waking up, I'm waking up..." And it ends as it began, with "Come back soon..." fading into the end.

Light for the Lost Boy is a tough one to summarize. It's the kind of old-fashioned record that isn't a collection of singles, but a complete work that begs for full attention start to finish. It is simultaneously old and young, happy and sad, light and dark; it awakens gratitude for life and yearning for resurrection. And every listen seems to reveal something else -- a lyrical gem or extra sonic detail.

This could definitely be different for Peterson's followers (though they can have fun picking out the hidden references to his past work), but the change is a welcome one. Music fans in general owe it to themselves to not only listen to this project, but to give it time to settle in the heart and soul. As a lament to lost innocence and a celebration of new creation, Light for the Lost Boy is one of the year's best and bravest records yet.

At this point in his career, expectations for any new Andrew Peterson are going to be borderline unrealistic. The man seems incapable of making a bad album. Part of his success has been maintaining a pretty consistent sound. His folksy approach occasionally varies in intensity, but the foundation is always the same. Peterson's last release, Counting Stars, was one of his most gentle, so it was reasonable to expect Light for the Lost Boy to be a little more upbeat. Instead, we get a surprising shift in style that we've not heard before from Andrew, at least not on such a large scale. The folk influence is the smallest it's ever been, being replaced by a minimalist, ambient instrumental approach. Most tracks revolve around Peterson's vocals with airy synths, violins, and gentle acoustic guitar in the background. It's a kind of continuation of the the sound of "You Came So Close" from Counting Stars. It's different, and yet it's nearly as beautiful as anything we've ever heard from Peterson. I have to admit I was skeptical at first, but then I was carried off by an abundance of beautiful melodies and sincere, profound lyrics, as I always seem to be when I listen to Andrew Peterson. It's hard to even pick highlights due to the high quality of the whole album, but I found myself repeatedly drawn to the heartfelt message of "Rest Easy," the whimsical "Ballad of Jody Baxter," and the almost epic final track. In fact, in this final song Peterson asks "Don't You Want to Thank Someone," and I do. I want to thank Andrew Peterson for making another beautiful album and continuing to be a bright light in the world of Christian music. - Timothy Estabrooks, 8/27/12