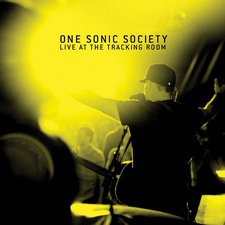 One Sonic Society
Live At The Tracking Room

Despite what would likely be their protestations to the contrary, the members of One Sonic Society have arguably created what has perennially been one of the shortest-lived phenomenons known to the music business - the supergroup. Made up of esteemed composer Jason Ingram, former Delirious? members Stuart Gerrard (guitar) and Jonathan Thatcher (bass), and Hillsong United drummer Paul Mabury, the copiously-credentialed international foursome has slowly, but surely, carved out a slot for itself in the modern praise & worship arena over the course of three EPs and its debut full-length outing, 2011's Forever Reign.

While the majority of bands seem to be driven by the musical inclinations of either their lead singers or most prominent guitarist, the OSS bunch most closely mirrors the sonic proclivity of Mabury's former outfit. Indeed, with their chorus-styled lead vocals, meandering melodies and unrelentingly mid-tempo rhythms, "Always," "Lay Me Down" and "Higher Than All" - the three of which are sequenced one after the other near the beginning of the album - could well have been outtakes from any of the last handful of Hillsong United releases.

Of course, this unmistakable similarity, in and of itself, is hardly a bad thing, particularly in light of the fact that Mabury, himself, may well have had much to do with the sonic textures on at least some of the HU records in question to begin with. The problem, however, lies in the fact that the abovementioned entries, along with similarly generic cuts like "Jesus, Son of God" and "Almighty God," have very little appreciable hook or melody to sink one's teeth into. Indeed, many a listener would be hard-pressed to sing any one of these individual tracks from memory even after multiple listens.

In its defense, the songs on Live At The Tracking Room are scripturally-based, lyrically unambiguous and ultimately uplifting. And one gets the sense that, in the live setting, where mood accounts for as much as (if not more than) melody, these cuts would certainly help set, and maintain, a welcome sense of reverence and meditation. Stripped of the surroundings in which they were delivered, though, their reverential tone is significantly muted as they blend together into a mostly like-sounding whole.

The live project does contain one or two glimmers of light. "God You Are My God" and "As for Me" get a slight nod over cuts such as "Higher" and "Always," thanks to the former pair's iridescent electric guitar work and slightly more pronounced melody lines. "The Greatness of our God," which also appeared on the OSS One EP and Forever Reign album, is certainly an engaging, well-delivered pop tune. And "Forever Reign" - hands down, the most transcendently intimate moment here - evokes the warm, intimate sound of a tight-knit group of seasoned jazz musicians huddled together playing the music they love in a tiny, out-of-the-way jazz club after closing time.

By and large, though, where the best live records tend to unearth new facets of, or offer an entirely different slant on, already-familiar favorites, Live At The Tracking Room, with only one or two exceptions, simply offers slightly less-glossily produced versions of the original studio-based compositions. The band does do a nice job of balancing new and previously-released material (roughly a 50/50 mix), and fans of the Society's back catalog - or the Hillsong United back catalog, for that matter - are likely to find the new project equally to their tastes. But, while there's nothing on the out and out off-putting on the live effort, its overly homogenous musical palette and similarity to the OSS cooperative's previous work unfortunately renders it largely superfluous.