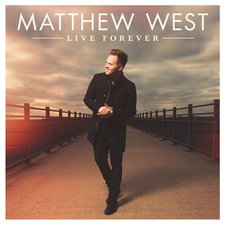 
Six years ago, when Matthew West decided to rent a remote cabin and field letters from listeners to tell him their testimonies of faith, heartbreak, encouragement, and divine intervention, he hit upon a talented storywriter's jackpot. Tasked with putting these stories to song and sequencing them into the tightest concept album of loose stories, the response was so overwhelmingly positive that West had hardly any choice but to bring the concept back again. Tens of thousands of stories and stellar two albums later, the method returns for a third time on West's sixth major label release, Live Forever.

Now after three albums that were born from this concept, West has placed himself into a rather difficult position. The Story of Your Life and Into The Light, for better or for worse, practically reinvented West's image, transforming him from a talented-but-straightforward contemporary pop singer-songwriter into, essentially, a journalist of faith tasked with responsibly and effectively relating other people's stories for mass consumption. As novel and captivating as this idea was at first, the question remained of how long West could keep it up before he's milked it dry, and frankly, the answer is probably album #3, and I would speculate that West probably knew that going into it. As a result, the musical and storytelling aspect of Live Forever is quite different than the contemporary CCM approach of Story and Light. In comparison, Live Forever is lighter thematically and a lot poppier musically, focusing a lot less on the unique and emotional aspect of the stories and telling them a lot more broadly. This gives us songs like "Day One," "World Changers," "Mended," and the title track which can hardly be traced to an original, individual story (or at least, not as far as I could tell; perhaps once West talks more specifically about some songs, the uniqueness of the story may be easier to see). Of course, West also give us songs like "Tryin," "The List," and especially "Anything Is Possible," where West almost seems to quote directly from the letters that inspired the song (and those who get the deluxe edition, which I definitely recommend over the reqular album, will receive two intensely personal stories in "Untold" and "Homecoming").

One thing that perplexes me a bit about Live Forever, though, is that its replayability factor is not as strong as either of its two predecessors, despite West clearly trying harder to make it sound more musically interesting to make up for the growing staleness of the letter concept. Perhaps it is because--unlike Story and especially Into The Light, which felt strongly unified both in concept and musically--Live Forever feels more disjointed and hodgepodge (a word that perhaps sounds more harsh than I intend it to), trying to mix in more instruments and sounds than it ought. "Tryin" is a good example of this "trying-too-hard" approach, with its overly bright surface, the deeply contrasting somberness of the bridge, and even a glissando thrown into the mix for good measure. This is compared to the bombastic orchestral ballad "Mended" one song later and synthesized "Grace Wins" one song before (not to mention the polar opposite approach of the simple acoustic album highlight "Oh Me Of Little Faith" four songs later).

Unfortunately, as well as West excecuted The Story of Your Life and Into The Light, the third time is not the charm here. By no means can I say Live Forever is a bad album; it is not. In fact, I like and enjoy this album a lot. It has several excellent and worthy songs like "Oh Me Of Little Faith," "Grace Wins," "Anything Is Possible," and "The List." And to be honest, I don't find any song particularly skippable or viewable exclusively as filler. But the concept is just a bit tired, the sequencing is a bit awkward, and the approach is not impeccably executed. Those getting Live Forever ought to know that it won't be West's best album yet, but it is nothing that a Matthew West fan (or any CCM fan for that matter) would ever truly dislike.

Live Forever is Matthew West's third project to draw inspiration from the thousands of personal stories fans have been sending him. The album is catchy, communicates important messages, and features West's talking/singing vocals, however it never takes flight because of its unimaginative songwriting and minor musical blemishes. Lead single "Day One" is a fun and dynamic pop tune with encouraging lyrics, but it repeats the same vague "starting over" message with clichéd phrases: "it's day one of the rest of my life," "the sun's coming up the beginning has begun," and "my best days are not behind me." The songwriting gets deeper with the story of a single mom on "Anything Is Possible" and God casting your sins "as far as the east is from the west" on "The List," but it's hard to shake the feeling that this is the same, old material. Musically, each song contains its own strengths and weaknesses, with some combination of unique and uninspiring guitars, keys, synths, strings, and horns. For example, the epic orchestral verses and sturdy drums on "Mended" only build to a boring chorus of drawn out guitar chords and uninteresting synths. A few songs deviate from the rest, like the back porch number "Oh Me of Little Faith" and the jazzy/southern "Heaven Is the Hope," but they never reach their full potential. Despite its flaws, Live Forever is an enjoyable album and will surely be an encouragement to many listeners. But if you are looking for an innovative pop/rock album, you'd be better off with the recent releases from Kevin Max or Mat Kearney. - Review date: 3/28/15, Christopher Smith