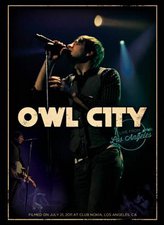 Last summer, Adam Young released his second national studio album as Owl City. Within a month of the album's release, Young and some of his friends embarked on a two-legged tour in support of it. The All Things Bright and Beautiful Tour went all over the United States (with special guests Mat Kearney and Unwed Sailor), then took the show overseas. During the US portion, Owl City hit up Club Nokia in Los Angeles, where they brought along a camera crew to record the first ever Owl City live show DVD.

The main attraction on the Live From Los Angeles DVD is, of course, the Owl City portion of that night's show. Owl City's performance is featured in its entirety, from the extended instrumental intro of "The Real World" (which features a variety of instruments being played, including two drum sets, one of which is played by Young himself) to the lovely finale of "If My Heart Was A House." This tour featured a monstrous setlist that spanned several Owl City albums, as well as some of Young's Port Blue material. Because of the huge tracklist (22 tracks, if you include "January 28, 1986" as its own track), the show is just over an hour and a half; much longer than your standard live show these days.

One thing you frequently hear about Young is how shy and introverted he is. Though you may be able to tell a little from his performance, you'd have to be paying a lot of attention to small details about body language. Young looks like he's comfortable being on-stage in front of the large Hollywood crowd. In addition, the band sounds fantastic. One of my pet peeves in today's pop music is predictability, which, to me, includes a pop musician's live show consisting of all the music on a backing track with no variation from the way it's presented to us on disc. Not so with Owl City. Of course, a lot of the music here is electronic, but a good portion of Owl City songs include alt rock and pop rock, which means live guitars and drums. The electronic aspects work wonders for the atmosphere of the stage show, and the live instruments sound crystal clear. I was especially impressed with the drummer. I don't know how to describe why, but when the camera focuses on him, he looks like his playing is second nature to him. But then again, Young has a knack for including incredibly talented and versatile musicians in his live show. I was also impressed with the fact that the band didn't just play the songs as you hear them on disc; they changed some of the songs' arrangements to make them something more than just another live rendition of the song. For instance, the rock intro of "Fireflies." This isn't always true, as Shawn Chrystopher's portion of "Alligator Sky" was done with a vocal track (as Chrystopher was not available for the tour), but they feature Chrystopher via hologram to rap along with the vocal track. Even when they can't make every part live, Owl City still finds a way to be unique and creative.

In addition to the stellar live show, there's also an interview segment. What I liked about it was that, before the interview with Young, they showed footage of the pre-show and sound check while the live version of "Fireflies" played. There was footage of the stage being erected, the sound guys doing what they do, as well as the musicians setting up their respective instruments. After that, Young answers some questions from an in-room interviewer (only Adam is shown or heard). I really liked how the editors incorporated bits and pieces of some of Owl City's music videos that went along with what Young was talking about. It was cool to hear Young talk about his music and how he got there, and the addition of the music video footage added so much to it. After answering a few of the interviewer's questions, he answered questions that random fans from the show asked. I can only imagine how cool it must be for those fans to see themselves and their questions included in this release. The only truly bad part about the interview segment is that it ends so very abruptly. After each answer, the screen goes black for a second before the next answer, and after the very last one, it goes black and just ends. I feel like they could've done something more with that, like saying thanks to the fans who asked questions, or something like that.

All in all, this is a terrific DVD. I've seen Owl City live twice (including this tour), and this is just how I remember it. If you've never gotten the opportunity to see an Owl City show, or you're hesitant because he's "just another pop artist," check out Live From Los Angeles. You'll get a good taste of what an Owl City live show is like. Make sure you head out to a show next time they roll through your area; until then, pick this one up and enjoy the show whenever you want.