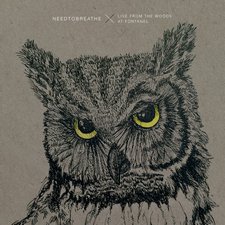 NEEDTOBREATHE
Live From The Woods (At Fontanel)


In the golden age of rock and roll, it was common for almost every artist to have a live album, and by that I mean the "we recorded the concert tonight and the record company is going to release it as an album" kind of concert recording. This includes bad notes, awkward stage banter and all, and if you turned it up loud in your living room, you could replicate the live experience to a minor degree. Christian music has far too few of these kinds of authentic, dust-in-the-grooves recordings, so it's refreshing to hear one from NEEDTOBREATHE, one of the best live bands going right now.

The intro to any concert is a key moment, and NEEDTOBREATHE blow it out of the water with "State I'm In," one of the most rocking moments from their latest album, Rivers In The Wasteland. But the first real hint that Live From The Woods is going to be a special concert recording is in the next song, "Wanted Man," from 2011's The Reckoning. Stretched to almost eight minutes and incorporating a new organ line that adds a bit of oomph to the song, "Wanted Man" goes through a few iterations over those eight minutes; from the rocking opening to an acoustic interlude that sees guitarist Bo Rinehart taking a soulful turn on vocals before the band abruptly stops playing, pauses for a dramatic few seconds, then launches back into the chorus with a renewed, manic thunder. Before it's over, the band has tagged the chorus of Modest Mouse's hit "Float On" to the end of the song in a creative fashion and livened up the audience to a manic roar in the process. All in all, it's a crazy and wonderful seven minutes and thirty-eight seconds, and it's only two songs into this double album.

The chilling "Difference Maker," a tune that is as heart-felt as it is subversive (lead singer Bear Rinehart is taking a shot at both his and other believer's tendencies to feel like they are doing real ministry when they are really serving themselves and their own egos), finds the band harmonizing up a storm while the audience sings along. The lyrics "we are all transgressors, we're all sinners, we're all astronauts, so if you're beating death than raise your hand, but shut up if you're not" are some of the most in-your-face words to come down the mainstream CCM pike in a long while, and the song is satisfyingly stretched out past the six-minute mark to raise its dramatic stakes. It's a concert highlight, and an emotional apex of the recording.

But it is far from the last one. "Wasteland" finds Bear testifying to the audience about the band's rough last few years in explaining the honest and emotionally resonant title track. Clocking in at almost seven minutes--with a soulful, gospel rave up at the end, worthy of classic U2--this take on the song shakes loose the muted studio version and lifts it up to the stratosphere. Current single "Brother" gets a fine acoustic (but no less powerful) reworking here, and lead album single "The Heart" rocks just about as hard as a band can rock and still be standing. The worshipful "Multiplied" is a great corporate worship moment and proves that vertical songs can be intelligent and creative and still singable by the average Joe in the audience.

By the time this double disc set of a concert is over with a mellow, harmonica-laden "More Heart, Less Attack" (imploring the people of God to be "more heart" and much "less attack"), it's clear that the boys from Possum Kingdom, South Carolina have put together one of the finest live albums in the world of Christian music. Only the odd choice to tack on a few "bonus" tracks at the end of the album mar what was a perfect game going into the ninth inning. But near-perfect is still worth it when considering getting those tickets when NEEDTOBREATHE comes to your town. They are quite simply a masterful live act.

Through the years, NEEDTOBREATHE has gone from just another pop rock band with their label debut Daylight to masters of southern, soulful folk/pop, right on up to last year's exceptional Rivers in the Wasteland. One year later, the band is releasing their first live album. Live albums are tricky: you want to capture the energy of the live show, but you also want to have good sound quality...but not too good, or it could just sound like a greatest hits compilation. Thankfully, NEEDTOBREATHE's Live From The Woods is an example of a good live album. It makes me want to see them live someday (not that I didn't before, of course), and the sound quality is crisp, capturing each instrument's parts and blending them together smoothly. I really appreciate the different spins the band put on some of their songs, such as the big rearranged portion of fan-favorite "Washed By The Water" and the upbeat "The Heart." It's also nice to hear Bear Rinehart offer up some song explanations and to hear the crowd singing parts of certain songs, such as in "Something Beautiful." The only thing I didn't particularly care for was the way the album ended. It seems the three bonus songs at the end, which seem like an encore performance, don't flow well. The first of the three, the stellar "More Heart, Less Attack," didn't quite feel like a good encore starter, and it has an unexpected fade-out at the end, when there is more material afterwards. Regardless, it's a small flaw on an otherwise good live album. It's great to hear songs from this amazing band's solid discography in a live recording, and hopefully someday I can witness it in person. If you're new to the band, this is a good representation of their discography (sans Daylight), but otherwise, this is probably just one for the collectors and the hardcore fans. - Review date: 4/7/15, Scott Fryberger

From the intimate moment of Bear and Bo performing "Brother" alone to the banjo-rock NEEDTOBREATHE staple "The Outsiders," Live from the Woods effectively captures the emotion and energy of one of the finest live shows around. All the components for a stellar live album are present: a strong set-list, balanced production, an enthusiastic (but not overbearing) crowd, and a few song explanations. The most significant value of this project, however, is the deviation from the studio recordings, whether it be small details like the guitar solo in "Something Beautiful" or complete overhauls on "Wanted Man" and "Washed By The Water." Die-hard fans already have many live tracks from the band (Live Horses, Austin City Limits, Insider exclusives), but the quality and cohesiveness of this album overshadows any potential redundancies. - 4/12/15, Christopher Smith of Jesusfreakhideout.com

Live albums, for me at least, have always had a short shelf life (so to speak). It's one thing to be at a show and experience the fans singing along, the loud music, the thumping bass you can feel under your skin and the energy, but while live albums can often breathe life into the memories you have of these experiences, they can't really quite recreate them in the same way. And then it's the little nuances--like a band member addressing the crowd in some form--that just don't work well with replaying a live recording over and over. NEEDTOBREATHE's Live From The Woods transcends the usual live album experience by showcasing a band that is comprised of truly talented musicians who clearly love the art of making music, performing it live, and expressing their personal faith in the midst of it all. While its lasting appeal obviously remains to be seen at this stage in the game, Live From The Woods does a more than admirable job of representing an incredible live band's live experience in recorded form. Favorites include "Drive All Night," "Difference Maker," "Multiplied," "Wasteland," "Keep Your Eyes Open," "Brother" and "The Outsiders." - 4/14/15, John DiBiase of Jesusfreakhideout.com