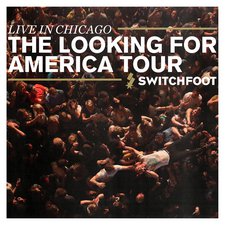 Switchfoot
Live In Chicago - The Looking for America Tour


"We want more than this world's got to offer."

Sound like a common theme in America so soon before election day?

With little fanfare, Switchfoot dropped a surprise live album, capturing a two-night gig in Chicago on their current "Looking for America" tour with Relient K. It's unusual for fans to get a chance to hear songs from a tour that still has dozens of dates remaining on the calendar, but it's a timely release and certainly an indication of today's nimble recording and publishing practices.

There are certainly live albums that sound better than this one, but it plays well when it plays loudly, and there are sonic highlights. Drew Shirley's acoustic guitar on "Hello Hurricane" rings nicely and Tim Foreman's bass line on "Float" is nimble and infectious. (Seriously, listen with a subwoofer.) There are 11 songs in total leaning heavily on recent history, including seven from the band's latest release, one from Fading West, two from Hello Hurricane, and the obligatory "Meant to Live."

Oddly enough, the album subtitled "The Looking for America Tour" doesn't feature the song "Looking for America" (one supposes the rap is a little difficult to recreate). The words are only chanted in the opening and before "The Sound." Another thematic link is found when a bit of "The Shadow Proves the Sunshine" serves as a transition between "I Won't Let You Go" and the call-and-response opening to "Love Alone is Worth the Fight."

"Bull in a China Shop" takes special meaning in Chicago, the home of Michael Jordan's Bulls. By contrast, Foreman displays a lovely and delicate falsetto on "I Won't Let You Go," a song that translates surprisingly well live. "If the House Burns Down Tonight" is suitably frenetic, and is an album highlight. "Live it Well" closes, the uplifting and simple refrain serving as a balm in a vitriolic season of American life. Most of the material on this album emerged from a dark season, but it's noticeably optimistic and uplifting.

One doesn't imagine that Switchfoot intended this album to be the definitive record of their consistently excellent live shows, and it's interesting that they don't really have a definitive live album. Treat it instead as part "live version of Where the Light Shines Through", part unexpected but delightful surprise, and part reminder of light in dark places.