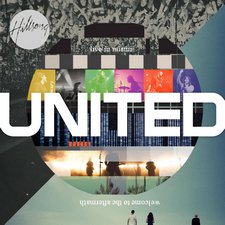 Hillsong United
Live In Miami: Welcome To The Aftermath

When it comes to popular worship music, Hillsong United is an unstoppable juggernaut. For some time they were releasing albums on an annual basis with new material for local churches to use in their congregations. The albums didn't showcase an extreme abundance of creative expression but, regardless, it provided new songs for the Sunday morning service. However with last year's album Aftermath, the creativity reached a level that was unexpected and very much appreciated. This year the ladies and gents in Hillsong United return to a live recording format as they bring their recent release to the stage with Live In Miami: Welcome to the Aftermath.

With a collection of songs that have been featured on multiple albums, it can honestly be stated that the album does not feature anything new. Thankfully, though, the live translations from the previous release and the updates to oldies make this an album truly worth purchasing. If you need another reason, the album contains two discs and features over two hours of music, plus the option to purchase a DVD version.

Songs like "Go," "Nova," and "Aftermath" are represented without flaw and obviously worked just as well if not better in a live setting. The DVD also allows for fans to see the diversity and versatility of the band as you can see that everyone in the band does not do just one thing. When worship leaders Matt Crocker and JD were not singing, they would be on a midi-keyboard or a drum set or getting their hands on anything that makes noise. In addition, their energy is almost contagious as it encourages the consumer to become a participator in the worship.

An excellent highlight would include the beautiful acoustic driven version of "Bones." The beauty of turning an electronic-ethereal song into something that feels more organic gave this track an incredible twist. If people thought the song didn't feel "churchy" enough, this might change their mind as it creates such an intimate atmosphere of worship. Evidence of this can be seen clearly on the DVD, and is not only a breathtaking moment but also one that leaves an incredible impression. "Rhythms of Grace" continues the trend of excellence as United worship leader Jad Gilles brings a whole new depth to the song. His strong-yet-tender vocals bring stability to the song that last year's release slightly lacked.

Classics that receive great improvements here are "You," "Mighty to Save," and "Yours Forever." Nevertheless, none of them compare to "All I Need Is You." The passion and reverence contained in the song is breathtaking. At the climax of the song, Jad's vocals are at his best as he belts out, "You hold the universe. You hold everyone on Earth." In addition to that, watching the crowd join in on the DVD makes the event even more powerful.

Keeping all of this in perspective, at the end of the day, the album is a collection of songs that every faithful fan of Hillsong United has heard. What makes this project so incredible is the ability to watch the concert from start to finish. Let me be very clear about this: the album itself is good, but the DVD is better. While just the audio gives the listener the ability to take the music with them everywhere, the worship is captured and experienced to its fullest on the DVD. It truly transforms you from being a listener and a music consumer to being a fellow worshiper and participator. That being said, this might be one of the most honest representations of the band as a whole and also proves why Hillsong United is such a mighty force in worship music.