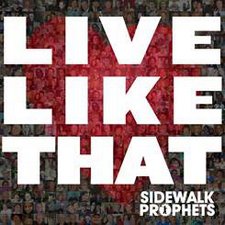 Sidewalk Prophets are the ideal scenario of any independent band: make a few indie albums, get industry attention, sign a record deal, and release studio projects with constant touring alongside big-name acts. In this sense, Sidewalk Prophets have been able to spread their message of hope and love to a vast audience, and with the massive success that was their debut album, their sophomore release on Word Records, Live Like That, capitalizes on that same fervor to bring both believers and non-believers closer to Him. However, Live Like That is not the improved expansion it should have been, and instead is more of the same.

As evidenced by Sidewalk Prophet's debut These Simple Truths, the band's real appeal centers around AC pop anthems with practical nuggets of easily-singable adages. With almost every track seemingly made for simple radio play and easy listening, Sidewalk Prophets' formula is a gripping and easily repeatable one. As a result of their debut album's success, Live Like That naturally follows in these footsteps. In making waves on the Winter Jam circuit alongside AC pop outfit NewSong, Sidewalk Prophets already sounded pretty similar in their approach to the CCM veterans, but Live Like That only shows more signs of merely mimicking the aged pop stars in their simplicity and harmlessness.

Live Like That's prelude is titled "Hebrews 12:1," which reads "Therefore, since we are surrounded by such a great cloud of witnesses, let us throw off everything that hinders and the sin that so easily entangles. And let us run with perseverance the race marked out for us..." This verse does sum up the feel of the title track, which asks hard questions about the nature of grace to change one's life and pleads for a living testimony for Jesus ("I wanna live life that and give it all I have/so that everything I say and do points to You"). In concrete fashion, Sidewalk Prophets would have done a good job to set up their album in this way for careful and convicting messages for Christians everywhere. However, the rest of the album is rinsing-and-repeating without much deviation from the norm, lyrically or musically.

After the well-implemented title track comes the incongruously bouncy "Love, Love, Love," which does nothing to help its case with the corny lines "It's a great big hug for all those haters/it even broke through the dark side of Darth Vader.../Even Chuck Norris can't defeat it." "Save My Life" encapsulates the band's trademark humdrum song of reaching others for Christ, using stories of everyday people to illustrate the touching nature of grace. Not to downplay the track's sacredness in message, but the synth-generated strings and completely predictable song structure only result in an unremarkable outcome. And from here on out, most the album mellows out in an expected, though not completely regrettable, pattern; the forceful "Wrecking Ball" and the country-tinged "It's Good (Love's Not Safe)" help a bit to change up the album's feel, but these are only notable exceptions to the rule at hand. This is the standard CCM album at a glance, and there are too few moments where the quintet seeks to shake things up.

Sidewalk Prophets' simplicity is a little hard to argue with, but most tracks just graze the surface of what the quintet is truly capable of achieving. After successful tenures on Winter Jam, the straightforward nature of the tour's message has rubbed off on them in an absolutely positive way, but their artistic abilities should extend beyond that same level of minimalism, even if it means just inducing more variety in a 12-track record. Live Like That is the natural follow-up for Sidewalk Prophets, though it could, and should, have been much more.