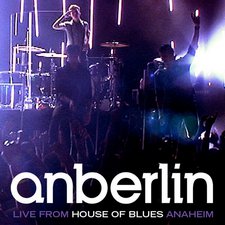 Anberlin's career has certainly taken interesting turns. With Dark is the Way, Light is a Place almost a year old, the band's popularity has only grown with time, and even since their days at Tooth & Nail Records, they've always been a band to watch, their live show being no exception. And with plenty of material at their disposal, it makes perfect sense for Anberlin to put out a live project, but the result, Live from House of Blues Anaheim, isn't as glorious of a project as one would initially assume.

After five albums (plus a b-sides record), Anberlin has concocted quite a few hits to their name, and most of the fan favorites make an appearance here. While songs from Blueprints for the Black Market are regrettably passed over completely, every other album is covered: two songs from Never Take Friendship Personal, three from Cities, three from New Surrender, and six from Dark is the Way, Light is a Place. To fans' delight, even "The Haunting," a popular b-side from the Cities sessions, is recorded live. On its face, this tracklisting is pretty fair to the band's catalog, but many fans could have gripes with some missing favorites, particularly the acoustic "The Unwinding Cable Car," which always sounds stunning in its live form ("The Symphony of Blasé" seems to be the replacement here, which actually isn't a bad choice). Most focus also seems placed on the newest material from Dark is the Way..., but as a general rule, the song choices aren't a real problem here.

What is a problem, however, is the sound quality, or lack thereof. For a professionally recorded live project, the fidelity presented on Live from House of Blues Anaheim is shoddy at best. To be honest, it sounds like more like a bootleg than an officially released live album from Anberlin's label. While any fan can tell one from song from another, this project doesn't faithfully capture the quality of an Anberlin show like other better-produced projects of other bands; the mixing job here is poor at best, with guitars sometimes overpowering other important aspects of the music. While live elements, namely crowds' screams and singing, are captured very well, it forsakes the lead and background vocals enough to not really be enjoyable to hear as a recording. It's unavoidable that at the end of the day, one would much rather hear the studio versions of these songs than their live counterparts.

As any Anberlin concertgoer should know, part of the quintet's live experience is Stephen Christian's stage antics and crowd participation. These are captured here to some degree, such as in the opening riff of "We Owe To This Ourselves" where Stephen shouts to the audience, "Get off your feet!" Exhilarating as these moments are, they are few and far between. And as active as he is on stage, Stephen's vocals aren't nearly as polished as they are in the studio, being out of breath and not completely spot-on with the lyrics. At an Anberlin show, there are two important elements, both the music and the stage performance, and this leads to forgiving switching of lyrics and cut-off vocals; but when this idea is captured on this live album, it feels unrefined and slipshod. Without any context of what's happening on stage, lyrics getting switched around and mistimed vocals are more annoying than endearing, particularly on "Dismantle.Repair." and "The Haunting." Again, this lends this live experience to seem more substandard than it really is in person.

While a live album from Anberlin has been overdue, Live from House of Blues Anaheim comes as a disappointment as a whole. Though the song selection is acceptable, it's the low sound quality and sloppy execution that really hinders this project from being as enjoyable as it should be. Most hardcore Anberlin fans already have this release, but Live from House of Blues Anaheim will still leave both them and casual fans hoping for a better-produced project of this kind later on down the road.

A live recording from Anberlin is a welcomed concept, but unfortunately, the band's first live album is more disappointing than satisfying. Poorly executed from its sloppy sound quality to just-as-half-hearted album cover artwork, Live from House of Blues Anaheim feels like it was released merely to recoup the expenses for the failed attempt at capturing the band's fall 2010 tour on audio and video. While we haven't seen the video portion of this recording (which is available also from iTunes, separately from the audio, in this digital-only release), I can only presume that the video also didn't turn out as well as originally hoped, based on the awful album cover quality and the fact that only some of the songs are available in video form. Sadly, it seems like one of those situations where the band and the fans get the raw end of the deal out of an attempt that went awry. Switchfoot has even given away better sounding bootlegs than this. Diehard fans can probably find some value in this release (the songs on the latter half of the album fair better than the first half... but maybe that's because we're used to the quality by that point?), but everyone else should avoid this one altogether... and hold out hope for the day when Anberlin gets an worthy live recording treatment (a la Thousand Foot Krutch's or Project 86's recent live albums). If anyone deserves a quality live album, it's these guys. - John DiBiase, 7/16/11