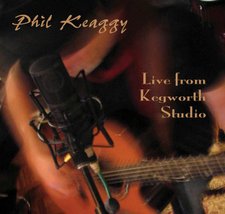 Given its most curiously-worded title, one might rightly wonder just what sort of undertaking Live from Kegworth Studio actually is. It isn't a live album in the sense of that which is usually performed in front of thousands of screaming fans in a huge arena or a select group of die-hard devotees sitting shoulder to shoulder in an intimate, out-of-the-way night club. Then, again, it isn't exactly like your average studio-based offering, either, where each member of a given band files dutifully into a soundproofed room and goes through a seemingly endless number of takes of their respective contributions to the project at hand - the sum total of which are then pared down, cleaned up and combined together to form a product suitable for mastering.

For the Kegworth effort, Keaggy ensconced himself in his home recording space and laid down non-overdubbed versions of some of his most beloved compositions in a manner that closely mirrors his now-familiar in-concert arrangements. The gloriously swaggering opening cut, "A Sign Came Through a Window," is translated from its spacey, more atmospheric version on the eponymous 1998 album into something altogether more shuffling and funk-filled, sounding, for all the world, like it could have been committed to tape in an abandoned shed in some out of the way swamp. The heavy orchestration of the original 1976 version of "Your Love Broke Through," pushed Keaggy's guitar work to the back of the mix. Here, the song is far more shimmering and intimate, allowing for a much closer look at its beautifully subtle chord structure. Just as notably, the likewise sparkling "What a Day" gains a heightened crispness here some forty years after first appearing on Keaggy's 1973 solo debut.

The real treats here, though, are the pair of reworked tracks from the 1995 True Believer release. It's long considered one of the lesser cousins in the PK discography, thanks to its tepid, overly busy production that all but drowned out Keaggy's usually piquant fret work and virtually relegated him to guest star status on his own album. Here, though, the jazzier, far more improvisational approach employed on that record's title cut offers the listener a far better appreciation of its winsome melodic content and allows Keaggy to extend the original four-and-a-half minute piece to nearly seven minutes without ever seeming gratuitous or long-winded. Just as importantly, the previously lumbering "Salvation Army Band" is retrofitted with a bluesy, slow-simmering groove that pulls out the song's inherent potency and grace and brings them to the forefront where they belong.

Keaggy's covers of "Make You Feel My Love" and "Here Comes the Sun" don't differ all that much from the more familiar versions by Garth Brooks and The Beatles. And the inclusion of no fewer than three tracks from 2007's Acoustic Café is slightly puzzling, given that album's relatively young age and the fact that the renditions presented here are noticeably similar to their Café counterparts. Those minor nits notwithstanding, Kegworth, to its credit, spans just about every phase of Keaggy's four-decade long career. And, despite the occasional bout of overfamiliarity, finally having this diverse array of songs together in one place is, in and of itself, arguably worth the price of admission. Those who have sat in the audience as Keaggy wowed them with his seemingly impossible feats of fret work are already well acquainted with his uncanny ability to refashion his studio material into something altogether new and different in the live setting. For everyone else, the better part of the superbly-performed Kegworth project will be nothing short of a true revelation.