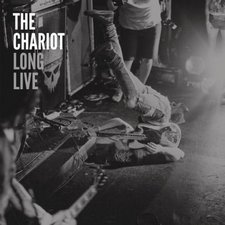 Josh Scogin is usually more well-known for heading up the chaotic Norma Jean in the band's infancy. But it's 2010 now, and not only has Cory Brandan now officially surpassed Scogin in number of Norma Jean albums, but Scogin has also fronted more albums with The Chariot. They put out new music rather quickly, with Wars and Rumors of Wars hitting shelves last May, and another album this year (along with a new record label, Good Fight, since they fulfilled their contract with Solid State). This latest offering is ten explosive tracks in true Chariot form, called Long Live.

The first interesting thing to note about Long Live is the song titles. The Chariot has always done interesting things with their song titles. From unbelievably long (check out track two on their debut) to puns for celebrity names (Unsung EP) to poetry (The Fiancee) and single-word titles (Wars and Rumors of Wars). On Long Live, all the odd-numbered tracks are people's names (five winners of a contest that The Chariot had after the release of their last album). The even-numbered tracks go from something relatively small ("The Audience") to something enormous ("The King"). This all has nothing to do with the music itself, but it is somewhat of a testament to the band's creativity.

The creativity is also found all throughout the music. While The Chariot's fans know to expect loud, chaotic and destructive music, the guys can still throw in a few surprises. One song may slow down to incorporate some piano while another song may make use of a trumpet. It's very atypical of hardcore music, but everything they do with these songs works very much in their favor (to borrow a phrase, there's definitely a method to their madness). Amidst all the surprising instrument choices, there's also a few other surprises, such as in the song "Calvin Makenzie." Somewhere near the end of the song, as the band is in full swing, it abruptly cuts into this old-school sounding song (think something you might hear on old-timey radio in the 20s) for about three seconds, then jumps right back into where it left off as if nothing happened. The song finishes with another clip from that same song ("Atlanta, Atlanta, that's my home town!"). It's so random that, at first, I thought I just accidentally hit the skip button. And speaking of two styles meshing into one song, another song that fits the description is "David De La Hoz." Scogin takes a break from vocalizing and allows Dan Smith (aka, Listener) to take over. It's extremely unusual if you think of it as a Deepspace 5 member making an appearance here. But his cameo actually better represents the style of his indie band Listener (in fact, his segment of the song could've fit in perfectly on Listener's latest endeavor, Wooden Heart). "David De La Hoz" is a definite highlight of Long Live.

If you're new to The Chariot, understand up front that most song structure here is tossed out the window, replaced with lots of experimentation and a do-what-we-want attitude. Don't expect any hooks or choruses here. It's just an all-out onslaught of merciless drums, crunchy guitars with an obscene amount of feedback and passionate, angst-ridden screaming. But... it sounds good, even for those who had a hard time getting into The Chariot's music in the past (such as myself). Those who already call themselves fans of The Chariot already have an idea of what to expect and will not be let down. Despite their record label change, they're still the same band, so followers have a new record to pick up this month. Long Live The Chariot.