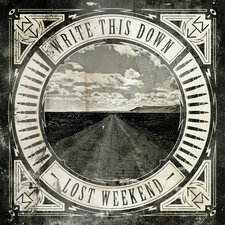 Write This Down
Lost Weekend

When Tooth & Nail signed Write This Down a couple of years ago, we had no idea what to expect. The three band members all looked like they were from different walks of life (or at least genres of rock music), giving the listener no idea of what sound to anticipate until actually listening. Their self-titled debut fell in line, not really sticking to one particular brand of rock. The band kept relatively quiet after its release, with no certain future with the record label, until their sophomore album, Lost Weekend, was announced.

The first track from Lost Weekend that appeared online was one called "Red 7." It displayed the heavier sound that Write This Down dabbled with the first time around; "Red 7" had crunchy guitars and some growling vocals, but also a lot of melody, and it never quite got into hardcore or metal territory. This is the majority of what you get on Lost Weekend: more focus on a particular sound they experimented with before. It helps make the album a lot more cohesive than before. "Red 7" fits perfectly alongside tracks like the ferocious opener "The Older I Get, The Better I Was," "I'll Make You Famous" and "The Florida Rage." Johnny Collier's rough screams and harsh yelling sound terrific, and they're paired quite nicely with the clean vocals of the guitarist Nate Rockwell. The dual vocals bring to mind other artists with similar vocal approaches like Emery, Taking Back Sunday and Brand New (though the screaming is much less frequent with these artists).

Those craving more of the band's alternative flavors will still be mildly appeased with some tracks. "Lost Weekend" is a good alternative rock track; you can still hear more of Collier's rougher vocals, but the majority of "Lost Weekend" is cleaner. The song "Touch and Go" may also be a highlight for these fans. It has a fair amount of screaming, but the bridge features Matt MacDonald of former Tooth & Nail alternative rock band The Classic Crime. He doesn't have a lot to say in this track, but his appearance is solid, as usual. Write This Down also have two ballads on Lost Weekend, "Cheap Affairs" and "Minnesota Interlude." They're very tame, with "Minnesota Interlude" featuring just an acoustic guitar and singing, and "Cheap Affairs" bearing resemblance to "Hey There, Delilah" by Plain White T's (but don't let that turn you off, because lyrically it's actually one of the most touching tracks of the record).

With the delivery of Lost Weekend, Write This Down have come out swinging, with unabashed and honest lyrics that hold nothing back. In "I'll Make You Famous," they talk about the stagnant (and in a matter of speaking, stupid) life of the party scene, and how every song and every night is the same over and over again. But most of the lyrics focus on Collier's failures, either as a Christian, a band member, or a person. The lyrics of "Cheap Affairs" are set in a tough conversation between him and a girlfriend/wife as he tells her about times that he's messed up on the road. The song says, "You know you're better off alone, I hate to tell you this over the phone but there was Portland and Columbus, now that's twice in a year, baby I'm a mess and you know I'm out of control, I'm feeling crazy when I'm all alone, the kind of crazy that makes you start shaking, saying things that you'd never say" (the "mess up" in question isn't revealed, other than not being there for holidays and birthdays, and I'm perfectly okay with that). Their cover of No Doubt's hit song "Don't Speak" even works pretty well in this theme of sorts, as Collier sings about the pain of some unknown (but most likely petty) circumstance that would cause two friends to split up. Though Lost Weekend is relatively darker in nature than Write This Down, they still show where their hope lies: "May God have mercy on you and I for the sins that we shared tonight, be still and pray for the peace that passes all understanding" (from "Red 7").

Write This Down have given us something quite unexpected with Lost Weekend. Thematically darker and musically heavier, it's already a highlight amongst 2012's hard rock albums (and the best thing that the Tooth & Nail branch has put out this year so far). Lost Weekend will probably appeal to fans of bands like Project 86 and Staple, but even if you're just looking for good hard rock to check out this summer, this is a good place for you start looking.

The mysterious Tooth & Nail Records outfit Write This Down made a grand splash in 2010's year in music, and their self-titled debut boasted a sweeping variety of rock approaches that fluctuated from song to song. Two years later, Lost Weekend is a far more consistent effort, honing in on a coarse hard rock style (best foretold in last album's "Redemption") with dirtier riffs and unrelenting aggression throughout the vast majority of its tracks. WTD's cryptic, but honest, lyricism is back in full force, as Johnny Collier and Nate Rockwell scream and sing with conviction, digging for better than the lowest common denominator in both themselves and their surrounding society. The clever and flawless No Doubt cover "Don't Speak," the acoustic-based and heartfelt "Cheap Affairs," and the short and sweet "Minnesota Interlude" are all the budding flowers in the record's rugged landscape, giving much-needed variety to the album's full picture. While Write This Down had little issue diversifying within an expanded genre, it was a slightly unfocused collection, and though Lost Weekend addresses this area effectively, it's almost too locked in to one sound, giving off an ever-so-faint formulaic flair. WTD has proven to be comfortable both in and out of their musical skin, and album number three will likely work best as the happy medium in their genre of choice. Still, Lost Weekend is an immensely appealing hard rock ride; worth ample listens this summer and beyond, it's certainly the most complete record from the Tooth & Nail roster this year, at least for now. - Roger Gelwicks, 6/3/12
Listen to a few tracks from Lost Weekend!
"Crash and Burn" - http://soundcloud.com/secretservicepublicity/write-this-down-crash-and-burn
"Red 7" - http://soundcloud.com/secretservicepublicity/write-this-down-red-7