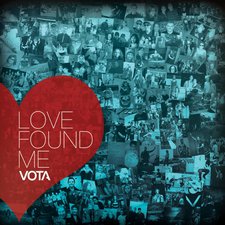 VOTA has been floating around in some form or variation since 1997. While the band has undergone massive changes in its existence and between changing styles, members, mission, and even name (before 2008, they were known as Casting Pearls), the band has always had one constant: lead vocalist and guitarist Bryan Oleson. The former Newsboy is the only remaining founding member of the band, and in fact, the rest of the lineup has completely turned over since VOTA's self-titled INO Records release in 2009. Armed with an infectious pop-rock sound and backed by many big name producers, most thought they were destined for greatness after their 2005 label debut, but unfortunately, their popularity never really took off. This year's offering, Love Found Me, is only their second release since then.

But the now-independent band has armed themselves with a new purpose. First of all, VOTA is offering this album for free via their website. But even beyond that, they have partnered with an organization called Tiny Hands International, which is dedicated to helping orphaned and abandoned children and fighting sex trafficking in South Asia. Those who click on the link to the album's website will be immediately greeted with a video that explains in detail their mission and the partnership between the band, but in short, VOTA is also offering the album on a pay-what-you-feel basis with all proceeds going to Tiny Hands, plus those who pay get the acoustic companion album No Plan B as well.

Almost as if they felt obligated to step up their game to meet this mission, all I can say about this album is that is it most likely the band's best offering of their career. The sound is, in general, similar to their 2009 self-titled electronic-infused pop-rock release, but with a greater variety. The production is still glossy and grooved for mass appeal, but the band has definitely added a flair of their own to the sound in the form of some quiet, stripped-back moments on one end (the title track, "Crying Out," and "Come to Me") and impossibly catchy, danceable beats on the other end ("Learning to Dream," "Lift Me Up," and "Blame Me"). Lyrically, the songs aren't really anything new, featuring mostly a mixture of worship and inspirational, radio-friendly pop. Indeed, the lyrics are the biggest setback of the album, but quite frankly, they haven't ever been the band's strong suit in the first place. But Oleson's vocals are as energetic and vibrant as usual and they help give as much life as possible to the music.

Love Found Me is a very easy record to admire, from both the aspect of it being the band's finest musical offering and their partnership with Tiny Hands to prevent sex-trafficking in South Asia. Plus, there is the added bonus of a full-length acoustic project in No Plan B (consisting of five renditions of songs from Love Found Me, one from their 2005 release, a bonus track from their 2009 release, plus three more original songs), an album that many will undoubtedly like even better than the main pop-rock project. For those who decide to purchase the album, if you go to the website the band set up for the CD (link below), just brace yourself for a moving explanation of the band's mission and hopes with this album.