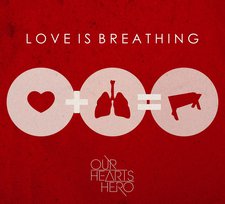 Our Hearts Hero
Love Is Breathing

Our Hearts Hero has been on an interesting quest. They went from being an independent artist with a solid following to Gotee Records. After one album on TobyMac's label, the band was back to independent status. Undaunted, the band kept at it and have now released their first Christmas album, Love is Breathing. The album brings a sound of alt-rock with pop-punk sensibilities to its listeners.

A quick glance over the song titles and the album appears to be one made up of original songs; this is not true. Instead, the album is full of re-imagined traditional Christmas songs with one and a half originals; the title track is in fact the only completely original song with "Magi" being the half. "Magi" features original verses with the chorus of "We Three Kings." It should not take you long to figure the track listing out. You will easily be able to tell what song is next given the titles. For example, "Bells" is "Carol of the Bells" and "Joy" is "Joy to the World."

The sound itself is good enough and the changed rhythms and lyrical patterns are at times welcomed. "Glow," "Town," and "Come" are tracks that really benefit from the change. "Bells" is one of the best versions of the song with sung lyrics available, though it will be hard for any band to top August Burns Red's blistering instrumental. Songs like "Joy," however, suffer greatly. The track starts out with a sound eerily similar to that of the MxPx song "Well Adjusted" (of Pepsi Super Bowl commercial fame). It's not an exact match, but the similarity is overwhelming. Just as I started to forgive them for borrowing the guitar riff, the third verse started. The song goes from a rock tune to a Joy Electric-esque electronic sound. Unfortunately, only Joy Electric can pull off Joy Electric and the sounds do not mesh at all, especially with the old school punk sing-a-long chorus that immediately follows.

Another track that didn't fare well with the change was "Magi." The verses sound like something Matthew Thiessen wrote. It seems like a forced attempt to sound like Relient K from the guitars to the cheeky lyrics. However, the acoustic guitar and violin combination on "Away" strike gold on one of the better versions of "Away in a Manger" you will hear. In addition, the hip-hop/R&B vibe on "Come" doesn't really match the rest record, but it is strangely appealing and placed perfectly as the album's finale.

The covers are decent for the most part, but how did the original track turn out? The short answer is brilliantly. Drums and piano dominate the track that tells the story of Christ's birth through the eyes of one of the shepherds in the field. The chorus proclaims, "Love is breathing. Hope is screaming tonight in the Baby's cry." It goes on further to say, "Everything we know's about to change. He's laying in a stable in a manger asleep on the hay." The song is a different view of the Savior's coming and really hits home the importance and true meaning of Christmas.

Overall, the album is an enjoyable listen, but I can't help but think other artists have done most of the songs better. That being said, Love is Breathing is still worth picking up if you are a fan of Christmas rock tunes. You may want to skip around a bit, but you should find enough to make your Christmas a little merrier. Best of luck to this band in the future.