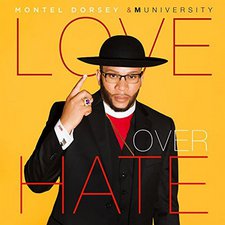 
In light of so many tragic and violent events occurring over the past few years (or at least being given copious amounts of media coverage), many groups and individuals have felt the need to speak out. In this case, Montel Dorsey & M University are taking a stand through their debut album, Love Over Hate.

The album opens with an interlude featuring recordings from last year's shooting at the Orlando, Florida nightclub and a series of statements reinforcing the truth that man is not given the authority to condemn and sentence others. 1 John 4:8 is quoted and serves as a structure for many of the album's themes. Among these are discouragement, violence, spiritual warfare, racism, hate, and of course, love. While there are many great tracks on Love Over Hate, a few stood out as particularly special. Early on is "Suit Up," which features Farrin Sherelle on guest vocals. It's still early in the year, but this piece is easily in the running for one of 2017's top ten songs.

"Won't He Do It" is another great offering. It's simple, yet brings a warm familiarity with its lyrics and vocals hitting some excellent sweet spots. "Jesus Deliver" features some beautiful vocals and offers devout sincerity in its prayer. "More" also makes a great mark, effectively pairing the lead vocals and background choir in a great fashion.

Love Over Hate is truly a gospel album at heart, but its structure and style will likely draw a few hip hop enthusiasts. I'm far from an expert on gospel music, but this album is a real joy to listen to. There are many great Gospel truths to be heard here, and the variety of artists contained in this one project keeps the album feeling fresh and inspired all the way through.

Ignore that star rating for a moment. Love Over Hate, the debut album from Montel Dorsey & MUniversity, succumbs to the pitfalls of the gospel genre and a presumably small budget, but it is not without moments of brilliance. The issue is, that brilliance is never sustained throughout an entire song. The album gets off to a rough start: opener "Love Over Hate (Interlude)" -- which doesn't really qualify to be an "interlude" -- features Dorsey commentating over a newscast, which makes it seem like this will be a concept album of social awareness, but that doesn't really happen. Next, the title track is drenched in Auto-Tune and makes it seem like Dorsey is about to lead us through a standard R&B album. The following song, "Suit," finally sets the mood for Love Over Hate; it sees Dorsey taking position as the conductor and bandleader of choirs and guest vocalists. This is the odd trend of gospel music that, when done poorly, gets really bad. Thankfully, the album has its handful of massive choruses that get the job done. "Celebrate," "Judah," "The Power" and "Jubilee" are, for the most part, a riot, while the aforementioned "Suit" might be the best song here, boasting a beautiful and empowering chorus. On weaker numbers, though, Dorsey's presence starts to feel superfluous, sometimes even annoying. He has yet to learn the lesson Kirk Franklin has perfected: how to back off for the best of the song. Dorsey steps in too often to adlib, echo the lyrics, pump up the crowd, or even laugh. It gets tiresome; it also comes across as contrived, since this album has mostly electronic instruments, utilizes small choirs, and never gives the impression that these songs are being performed live or that there's an audience. "Won't He Do It" and "Jesus Deliver" both prove that Dorsey's singing can carry a song, in a way that his adlibbing fails to accomplish. Yet, for the range of quality here, every song overstays its welcome, and the closer, "I Need Thee," is absolutely baffling--a confusing (and near frightening!) cacophony of sounds and voices that leave a sour taste in the mouth. The right ingredients are all here, but they're scattered throughout the album. Take the strengths of Love Over Hate, remove the genre excesses, and Dorsey could make something really great.
- 3/26/17, Chase Tremaine of Jesusfreakhideout.com