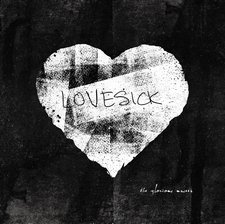 In 2007, BEC Recordings introduced us to a new worship group they had signed called The Glorious Unseen. With a more raw, indie, and unpolished sound than what mainstream worship fans had been accustomed to, The Glorious Unseen's Tonight The Stars Speak made an impact, but mostly on those who usually shyed away from modern worship music. Now, two EPs, one album, one hiatus, and a wedding later, Ben Crist is back with BEC for The Glorious Unseen's third full-length record, Lovesick.

It only takes a moment for the TGU fan to feel right at home with Lovesick; opening track, "The Love of God," contains every aspect that made The Glorious Unseen popular in the first place. Crist's voice is unmistakable, and the music is as lush and comforting as ever. Those new to the band may liken The Glorious Unseen's sound to the sound of The Ember Days when they hear the soft guitars and ambient (sometimes barely noticeable) synths in songs like "Pour My Love on You" and "How Could I Withhold My Heart?". The former of the two features a portion of fast drumming, akin to "The Hope That Lies In You" from the album of the same name, and then flows directly into "You Have Ruined Me" with some interesting guitar sounds. Combined with the anthemic drumming rhythmic guitars, "You Have Ruined Me" musically reminds me of Hillsong; lyrically and vocally, however, it's a different story.

The difference there is that The Glorious Unseen verbally worships God from a decidedly more personal and vulnerable perspective than mainstream worship acts. For some listeners, such as myself, worshipping from this point of view feels more realistic and it ends up being a lot easier to relate to--not that the other way in inherently a bad way; each person has their own needs and/or preferences. The Glorious Unseen's method seems more appealing to those Christians who may feel like outcasts, even in their own church body, as it brings worshipful lyrics in a more down-to-earth setting.

"You Have Ruined Me" is a good example of this lyrical style. First, the song's title alone demands exploration, as some may be confused at the notion of God ruining anyone. Crist says things like "I'll waste my life at Your feet" and "You have ruined me with Your love," which seem like bizarre ways to express your gratitude to the Lord. I love the deeper meaning, though, as Crist subtly reminisces on how lost and messed up we are, and as God's love cleans us and brings us back to life, our old selves are wasted away and, in a sense, ruined for the better. "Harp In My Heart" is filled with pure adoration for Jesus, "I am lovesick for You, my God, You have my heart, there's a harp in my heart and only You can play it, there's a song in my soul and You can sing it." Crist has always been passionate about his love for Jesus, but his time with Kansas City's Internation House of Prayer during the hiatus seems to have intensified his passion, as evidenced in lyrics like these.

Crist did have some co-writers involved in the songwriting process, but a couple of the tracks were also borrowed from other artists. On previous releases, we've heard The Glorious Unseen cover songs from David Crowder*Band, Third Day, and John Mark McMillan. On Lovesick, we're given not one, but three cover songs. The first is "Pour My Love On You," which was made famous by Phillips, Craig and Dean. The next is a couple of years older - the Zach Neese-penned ballad "The More I Seek You" - but has been revisited more recently by singer/songwriter Kari Jobe. The album's end takes a page from Matt Redman with the song "Can A Nation Be Changed?" - a rather appropriate song, considering it's an election year and some people will be voting with the Lord in mind. The Glorious Unseen and the writers of these songs don't seem like they would be that compatible, but Crist's arrangements of the songs stay true to the originals as well as make them feel like true TGU offerings.

With The Glorious Unseen acting as more of a solo project than before, it's understandable to wonder if the music will still be just as good as it always has been. Thankfully, Ben Crist teamed up with some incredible musicians with the ability to pick the project up right where it left off. Kickstarter backers have already received their copy of Lovesick, but those who enjoyed The Glorious Unseen before but missed out on the opportunity to help fund the album should know that a purchase of this album will be money well-spent. Tonight The Stars Speak is still my favorite (and arguably the strongest of the band's discography), but Lovesick is right up there.

The Glorious Unseen has a way with atmospherics. Over the course of three-plus records they have established a thick, velvety canvas of sound in which to offer up their songs of praise. Lovesick thankfully picks up the pace a bit, though even on faster tunes, Ben Crist's somber vocal delivery can make everything sound a bit sleepy. Opening tracks "The Love Of God," "Pour My Love On You" and "You Have Ruined Me" crank up the beats-per-minute and diversify sounds to distinguish themselves from the rich backgrounds that sometimes The Glorious Unseen have gotten trapped in. Aggressive "In This Moment" recalls The Violet Burning at their worshipful best and "Harp In My Heart" has some terrific sounds and lyrics and offers the album's title up in a chorus that soars.

As much of a step forward as this album is for Crist and The Glorious Unseen, they have still yet to write that "knock it out of the ballpark" tune that they seem capable of. But as a personal album of insightful worship tunes, Lovesick delivers. - Tincan Caldwell, 10/10/12