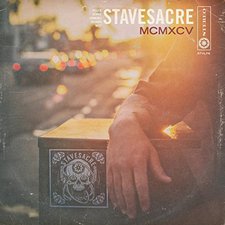 
MCMXCV (Roman numerals for 1995) is the first full-length album by rockers Stavesacre since 2006's How to Live with a Curse. For long-time fans, this album harkens back to the early years (from Friction to Speakeasy) as vocalist Mark Salomon shows off the raw intensity of his voice. Throughout, we get the impression that he's pushing himself to the limit, as if he's at the very top of his range and is giving everything he has. Many tracks on this album echo the honesty and emotion of older ones, and this revitalization is likely due in part to the return of guitarist and co-founder Jeff Bellew. He and rhythm guitarist Ryan Dennee create a wall of sound, while bassist Dirk Lemmenes and drummer Sam West lay down an active yet solid backbeat.

The opener, titled "Intro," gives us fuzzy glimpses of past songs like "Bull Takes Fighter" from the 2004 EP of the same name. The first actual song, "The Dead Rejoice," continues this nostalgic theme as the speaker recounts the experience of first becoming a Christian: "The hand of God from the rafters / in the saddest last act of a play / the end was just the beginning / shook off the dust of that grave." Along with commentary on Christian life, the band has placed numerous allusions to old songs for dedicated fans to find. Even so, that doesn't mean new fans can't appreciate this album as well, since the singing, musicianship, and lyrics haven't lost their power. In fact, Salomon's vocals are just as engaging, if not more so, as they have always been. In "The Tower," for example, he reaches notes that are even impressive for him and his stratospheric high-range. Meanwhile, the instrumentation in songs like "The Tower" and "Accelerating into Brake Lights" reflect the fury and passion that drew fans to early songs like "Threshold" and "Loader."

Even in the comparatively less eventful "One Hand Clapping," drummer Sam West's syncopated snare work, Mark Salomon's always-earnest vocals, and the rhythmic chugging of guitars drive the tune onward. "Sleepyhead" is one of those songs that's not quite a ballad, but not a rocker either. For those familiar with Speakeasy, it's similar to "Keep Waiting" in both style and structure. From the opening, to the main guitar line, to the mellow chorus, "Sleepyhead" gives ardent fans a warm, fuzzy feeling without being "Keep Waiting Part 2." The lyrics, meanwhile, reinforce this feeling as Salomon sings, "Stop me if you've heard this one before."

The volume gets amped again as Bellew and Dennee kickoff "Mr. Larkspur" with biting power chords reminiscent of the band's early career. It's arguably the darkest song on the album. The verses may remind some listeners of early Project 86 as Mark Salomon's wispy vocals and ominous lyrics call to mind Andrew Schwab, and songs like "Sad Machines" and "Last Meal."

Salomon delivers a mellower performance in "On Being Human," while West plows ahead with a thrusting beat on the intro and restless tom work in the verses. It's as if he is setting the mood for Salomon's message about warring against human nature-how we struggle with ourselves. As the chorus says, "You are who you've got to fight / to be complete." In the following song, "Breathe Me," the music again echoes the theme as the vocals are slightly out of step with the rest of the band. Salomon musically embodies the lyrical vulnerability as he sings, "I am small / and needy." As with the comparison between "Sleepyhead" and "Keep Waiting," the ballad "Breathe Me," with its soul-bearing lyrics and vocals, feels like a spiritual successor to "Gold and Silver." Like "Grace" from the previous album, "Breathe Me" is about a man crying out to God in the midst of his own failings, but, as with "Gold and Silver," Salomon embraces raw emotion as he sometimes veers slightly off-key.

"Sideways," while not a stand-out track like others, is a fun, jaunty song that, ironically, talks about lost innocence: "What was once a simple world / went sideways and insane." "Moonstone" takes an interesting detour from Stavesacre's usual sound as Mark Salomon shows off his falsetto chops and Sam West plays a syncopated, jazz-inspired beat. The subject parallels The Prodigal Son as the speaker regrets leaving the life he's always known and longs to return home. Like "Breathe Me," it's a beautiful, mournful song that effectively offsets more energetic but equally good tracks like "The Dead Rejoice" and "The Tower."

The last song, "Hymn," though not the most memorable finale, is nevertheless a satisfying closer that reminds us of Stavesacre's ultimate focus with the lyric, "Great and small all belong to Thee." It's a rally cry that musically and lyrically reaffirms this album's nostalgia, which we fans share. On that note, we hope the line "We're not going anywhere" is Mark Salomon's wink and nod to us. If there was something missing from How to Live with a Curse, it was the lack of sincerity and intensity present in earlier Stavesacre albums, but MCMXCV, for the most part, brings this element back to the band's sound.