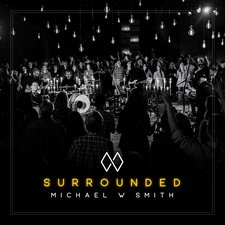 
Only one week after his most recent pop release, A Million Lights, Michael W. Smith follows up with this worship-based offering titled, Surrounded. The biggest question facing longtime fans could be, "what does it sound like?" If there are any hesitations due to his recent foray into EDM infused pop on A Million Lights, rest assured; Surrounded sounds nothing like it. If you are familiar with his prior worship releases (Worship, Worship Again, A New Hallelujah), it does not deviate much from that approach. It sounds bombastic, with a big backing choir, and the live setting works well to capture the spirit of the songs. It avoids the trap of some worship studio recordings that sound over produced, making you feel like you are there in the room. As he puts on his worship leader hat, he proves to be in fine form, never seeking to overpower the songs, and keeping the spotlight on Jesus rather than himself. Other things that work well are the original songs that open the album, "Your House" and "Light To You." In fact, they are this reviewer's top tracks on the album overall. "Your House" has a slow beginning, but turns into a driving, upbeat song, that kicks the set off with a high energy. Second track "Light To You" eases the album down to a mid tempo jam with lyrics like, "even the darkness/is light to you/it's hard to believe it/but you say that it's true/even the darkness is light to you."

Though there are many things working in favor of this album, what keeps it from being a stellar addition to the releases this year? For one, the runtime for tracks "Reckless Love" and "Miracles" approach nearly nine minutes each, making each of the songs feel like they are dragging toward the end. Though the use of Spanish lyrics in song "Miracles" is a pleasant surprise moment of diversity, the song would still have benefited from trimming. Also, a greater balance of original material to covers would have helped the album feel more necessary. With originals "Your House" and "Light To You" being such great songs, the questions begs to be asked: why not take a little longer and write a few more like them?

In addition, though one of the greatest strengths of the album is giving the listener the feeling they are right there in the room, it is also a weakness. The reason being that, aside from Smitty's voice as the main worship leader, you could just as easily be listening to recent releases from Elevation, Bethel, or Jesus Culture. There is very little, or nothing, changed about these very familiar songs, leaving an overall been-there-done-that feel. The songs "King of My Heart" and "Great Are You Lord" are the biggest examples of this issue. Though both are fantastic songs, they debuted in the years 2015 and 2013, respectively, and have arguably been covered ad nauseam at this point. These two would have likely been the best songs to replace with more Smith originals. Lastly, the album would benefit from a more notable presence of a female lead or feature sprinkled in. With so much of the worship genre being driven by strong female led vocals in 2018, it feels like a miss to not have it included, even ever so slightly somewhere in the mix.

However, having said all that, if you are a fan of Michael W. Smith, or the worship genre itself, this album will be sure to please. Though it does not reinvent the wheel, it does deliver a solid set of songs personal worship time. It comes highly recommended, with original songs "Your House" and "Light To You" serving as the must-hear songs of the bunch.

The current trend in live worship is small, intimate settings, acoustic arrangements, and for the most part, avoiding big showcases. That's pretty much (with a couple exceptions) what you can expect from Michael W. Smith's Surrounded, but that also massively plays against Smitty's biggest strengths. I don't know if he's ever tried to do anything this small-scale before, and it shows. On over half of the album's twelve songs, Smitty seems like he's sitting uncomfortably on the verge of letting the songs grow into the big, dynamic, memorable spectacles like on Worship, Worship Again, and A New Hallelujah, while trying hard to hold them back from doing that. The result is an unremarkable and unmemorable standard worship album. Between the lack of standout moments and the average-ness of his cover songs, this album hardly feels like it was necessary, especially with a new (and much better) album just being released the week before. Michael W. Smith is responsible for some of my favorite live worship albums ever, but Surrounded feels like a major letdown in comparison. - Review date: 2/28/18, written by Mark Rice