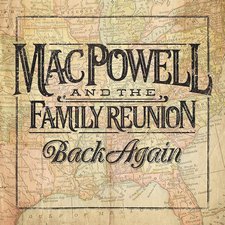 Mac Powell and the Family Reunion
Back Again


Last spring, Mac Powell and his post-Third Day band, dubbed the Family Reunion, independently released a 10 track, self-titled album. Back Again is a wider re-release of those 10 tracks with 5 new songs added in. For the uninitiated, Mac Powell and the Family Reunion is a traditional country rock group that harkens back to the familiar subject matter and sonic inspiration of that genre rather than the stricter religious aim of Third Day. Powell pulls this transition off naturally and seemingly effortlessly.

A few of the tracks allow us to get a glimpse into Mac's life after Third Day. "Back Again" and "Going to California" paint a story of a traveling man who always comes back to the home that keeps him grounded, but "I Could Get Used to This" and Settlin Down imply that he might be growing more fond of home life and staying near his family. The song "Whoo!" is a celebration of the good things in life that make you want to shout. On "Watermelon Rind" and "Tiptoein'," you hear Powell lovingly reminisce about parts of his childhood in a way that warms your heart and brings a smile to your face. One of the best tracks on the album, "I'm Beginning to Wonder," is a very fun break-up song about a woman that didn't treat him well and left him wondering if she ever loved him at all. What I Came Here For is a solemn assessment of ones accomplishments after years of pursuing dreams and still struggling to know their true purpose in this world.

The musicality of the album is also very solid. Nearly every track is enjoyable and catchy and is a throwback to older, popular country music as opposed to today's country-pop. The rock and country guitar sounds (including steel guitar) frequently provide hummable and memorable riffs that open and punctuate the songs appropriately. The addition of the 5 new tracks to the album extends the length, but they fit well and dont overly affect the listenability of the album, even when pushing it from 34 minutes long to over 50 minutes long.

The original release of the album concluded with the beautiful song, "Heaven." With a slower tempo that is both introspective and celebratory, Powell contemplates the hardships of life and longs for a respite. The chorus has him acknowledging that this place does exist and it is ultimately Heaven, where even those who have died can be reunited with us. The song swelled to an instrumental exploration of emotion -- transitioning from longing to joy as Powell repeats the word "Heaven" to culminating album. Unfortunately, this release of the album changed the ordering of the songs, and "Heaven" loses some of its impact being in the middle of the tracklist. The new closer, Mississippi, is not nearly as strong and is one of the weakest tracks on the album.

With Back Again, Mac Powell and the Family Reunion achieve another family-friendly batch of music to enjoy during the summer months. The originally released tracks still feel like a great country throwback and the new tracks nearly universally serve to further that same goal. If you havent given this group a listen yet, or if you are curious about the new additions, Back Again is a great album that is well worth your time.