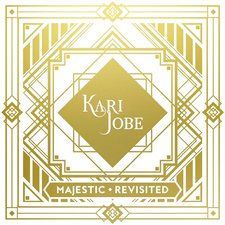 
Kari Jobe has garnered a big following in the six years she has been in the spotlight, and with one listen to her music, it's easy to see why--she has a beautiful voice and a tangible fervor for Jesus. After the success of her 13-track live album, Majestic, it is unsurprising to see Jobe put all 13 of these songs into a studio format. What is surprising is how she navigated past most potential redundancies in re-recording an album by completely revamping these songs. Majestic (Revisited) is not the typical stadium-ready corporate worship you first heard on Majestic. Instead, this album is finds its homebase in a calming electronic soundscape.

"I Am Not Alone" and "Always Enough" are prime examples of the relaxing nature of this album. They both use ambient synthesizers, heavy reverb on the vocals, and full bass to create a soothing effect. In that same spirit, the flow of the album has seamless movement from track to track, but it has enough tempo shifts to avoid feeling like one long song. Additionally, Jobe dabbles in various sounds to keep things fresh, ranging from the highly produced EDM textures of "Only Your Love," to the more natural tones of a string quartet on "Let The Heavens Open."

Lyrically, "How Majestic Is Your Name" and "Holy Spirit" offer refreshing worship, but the best songwriting comes towards the end of the album with "Forever." This popular corporate worship staple strikingly depicts the narrative of the death and resurrection of Christ: "One final breath He gave / as Heaven looked away / The Son of God was laid in darkness / A battle in the grave / the war on death was waged / the power of hell forever broken." As Jobe bursts out in the chorus, "forever He is glorified / forever He is lifted high," you can't help but praise God along with her.

Like the original album, however, the amount of unrepeated material in lyric and music is not proportional to the track lengths (the average song is over five minutes in running time). But even at its most redundant, Majestic (Revisited) functions as pleasant background music. In fact, that is part of Jobe's intention for this album: "I think it's just an album that you can turn on in the background in your home and it will just be playing over your kids and over your family." One other thing that holds this album back is the lack of highlights. This is mainly because the strongest musical and lyrical moments don't line up. For example, "Only Your Love" is engaging musically but too familiar lyrically, while "Forever" has great lyrics set to somewhat empty music.

Despite any minor glitches, if soothing atmospheric worship is your cup of tea you, will want to check out Majestic (Revisited). The lyrics all point straight to Jesus and the sonic experimentation, though new territory for the worship artist, proves to be a success.