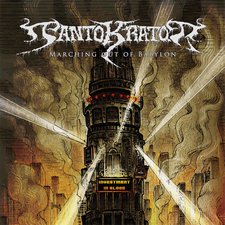 Pantokrator
Marching Out Of Babylon


Pantokrator, a name meaning all-powerful, is a fitting description for this Swedish metal band. In fact, everything about their fourth full-length album, Marching Out Of Babylon, is powerful. The themes, vocals, lightning-fast double bass (and that's not an exaggeration), even the in-your-face production -- none of this is for the faint of heart. The sound can be likened to a buzz saw invasion, and the lyrics cut to the heart like the Old Testament prophets. Like anything from another culture, there will be differences in normalities, and this style of metal is no different. Extreme metal from Nordic countries is a totally different animal from modern American metalcore. Thriving on lush minor chord progressions and equal fast-moving riffs and drums, a gloomy atmosphere takes precedent over stop-start breakdowns. Clearly this album, like the wild book of Revelation from which it gets its name, is only for "those who have ears to hear." With all disclaimers out of the way, let me just say, this is one of the highest quality Christian metal albums to come out in years.

With only eight songs, each is crafted as if it were a special event, like an episode in a mini-series. Plunging headfirst into "Day of Wrath," you feel as if you've been dropped into a battle that's already underway. Throughout this opening onslaught, the pace hardly lets up, but for a mammoth breakdown halfway through. The lyrics are unabashedly Biblical and showcase an all-powerful God who will not be mocked, "Tyrants spit on my Name daily/This will not stand!/You will know my name is The Lord/You will know my breath is fire." Lead single and album highlight "Wedlock" opens to a gnarly guitar riff, which is then joined by an Arabic-tinged scale and wedding themes seemingly straight out of Song Of Solomon. This is the first song of a majority to feature clean vocals to go along with razor-gargling growls. These cleans are still very powerful, but they add a distinct melodic and catchy element that cuts through the surrounding chaos. The title track resumes the overarching theme of freedom from ungodly systems, yet ends with an almost worshipful outro mixing beautiful harmonies, prayerful lyrics, and crushing double bass, "Thy kingdom come/Thy will be done." It's truly goosebump inducing.

A word of warning: the lyrics, while biblical in nature, can come off as brash or extreme to a breaking point (again, think Old Testament prophets). The most shocking is in "The Last Cheek," which uses a minor vulgarity to describe the wicked desecrating the church, "Consider the cost of your aggression/before you lay your hand on me and mine/before you p*ss upon the church of God/for when He brings the hammer down/It falls but once." In context, I can see how the word fits, and I agree with the overall message of leaving vengeance up to God, but it's still an unfortunate and unnecessary word choice. On the other hand, "Hidden Deep" has some of the richest biblical lyrics I've heard in a while, metal or otherwise, "Uncreated He creates/Unspoken He speaks/Let there be light/And there was, is, shall be...We serve I AM/the Son of man/He is the revelation/He is the mystery/He is the treasure in the deep."

One thing that impresses me most about Pantokrator, as opposed to many in this genre, is that each song has a distinct moment or chord structure that separates it from the rest, something that makes you think "oh this song has *that* part." Like the atmospheric intro of "Hidden Deep," the sing-along chorus in "We The People," or the choral ending of album closer "Phoenix Rising." In fact, this acapella ending is one of the most beautiful metal outros in recent memory, leaving you stunned and breathless as if at the end of a battle, "From my ashes like a Phoenix/I will rise/like the Son."

Marching Out Of Babylon is not necessarily an easy listen, but boy is it rewarding. It explores themes both deep and relevant, with an all-around aggression that's been lacking in most recent metal offerings. Through all the chaos, there's top notch songwriting employed here, and added listens reveal more and more artful details. Minus the few lyrical missteps, this is a metal masterpiece, and should not be missed by any who can stomach such extreme metal.