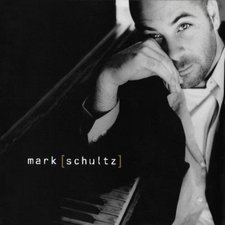 Comically heralded by Mark Schultz in 2000 as his "greatest hits" album (since he only had one out at the time), this self-titled debut finds a talented musician finally getting the chance to recognize his potential. Over the past decade, he has become known in the CCM world as a man with the ability to craft beautiful yet tear-jerking story songs based on real life occurrences while he was a youth pastor at First Presbyterian Church in Nashville, Tennessee. This album is no exception to the rule with songs that feature Mark solely playing the piano, while there are others that result in a familiar pop sound.

The album opens with its first single, "I Am the Way." While not the most exceptional song on the album, it is definitely one of the highlights due to a "sing along" chorus with words like "When you're down / look around / and you'll see I am with you." Simple, yet true. "Let's Go" is a catchy song that seems to prepare the listener for what's coming next here and we're not disappointed. The real heart of this debut manifests itself with two piano-based songs that remain, to this day, some of his most powerful song writing. First, we have "He's My Son," written for a family who's young son was diagnosed with leukemia. This is a hauntingly beautiful yet heart-wrenching prayer to God, written from the perspective of the father. Lyrics such as "Can You hear me? / Am I getting through tonight? / ... / If You can hear me / let me take his place somehow / see he's not just anyone / he's my son" make it almost impossible not to tear up. This honest plea makes for the best song on the album hands down. Next, "When You Come Home" is also powerful as Schultz tells the story of a growing man and his loving relationship with his mother; its title comes from her promise that she would always "...be here / when you come home" (I found myself with a lump in my throat while listening to this one as it reminded me of my own mother).

From this point on, the album continues strongly with few missteps. Highlights include the gospel-choir-backed pop song "When You Give," another piano-based story "A Cloud of Witnesses" and the upbeat and catchy "I Saw the Light." However, the weakest song on the album is no doubt "Fall in Love Again," which is a cliché ridden love song with lyrics such as "Just because you feel alone / it doesn't mean we're letting go /.../ When I think of you / I fall in love again." It's not a bad song but it just doesn't stand up to the previous powerhouse anthems. Interestingly, Schultz throws a bit of a curveball with the just plain fun "Legend of McBride" which is unique due to it being a fictional story about a heroic Texas ranger. Finally, "Remember Me" is an appropriate piano ballad to close off the album with beautiful lyrics and vocals.

All in all, this debut album definitely showcases Mark Schultz's talent for crafting powerful story songs due to his heartfelt vocals, beautiful instrumentation and great lyrics. While his more recent albums are still (for the most part) quite impressive as well, none of them have matched the honesty and power of this one.