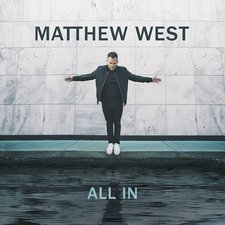 Matthew West
All In


Even the greatest artists have shelf lives. For a CCM icon like Matthew West who has crafted 7 studio albums (and 3 independent albums before that), the question that comes along with each release is simple: what's new? How does West attempt to provide fans what they want and still push genre boundaries and perfect his sound? With All In, West maintains his uplifting storytelling while dabbling with a more electronic palette and taking a few creative risks that don't always pay off.

Credit must be given to West for preserving clarity and consistency from the very beginning. By the end of the title track's first chorus, the general tone of the next 50 minutes is set. The electro-inspirational sound gives way to a surprising amount of acoustic drums and combines it with heavy percussion hits as a driving beat dresses up a simplistic chord progression. West holds on to this balance of 80% familiarity and 20% experimentation throughout the entire album, which makes for a comfortable listen overall.

West's formulaic songwriting and thoughtful lyrical imagery cements the album as distinctly one of his. Lines like "My feet are frozen on this middle ground/The water's warm but the fire's gone out" in "All In" are a dime a dozen here. The ongoing metaphor in "Mercy Is A Song" is also a treat. Topically, West seems to be most concerned with being sold out for Jesus ("Broken Things"), overcoming personal adversity ("Dream Again"), and appreciating the little moments in life ("The Beautiful Things We Miss"). As his fans know, West's stories can be both deeply personal and masterfully accessible enough that they can be applied to everyone, however, a couple of the songs here feel oddly detached. "Sound Of A Life Changing" seems to tell the tale of West's growing success, and although "1 Song" is directed towards God, it feels a lot more romantic in nature.

Although All In primarily consists of synths and electronic tendencies that work pretty well together, West does step outside the box a couple times...to varying levels of success. "Amen" is an absolute barnburner that'll definitely leave you foot-stompin' and doing your best to catch up with West's rapid delivery. On the opposite end of the spectrum, "Power Love Sound Mind" doesn't work on any level. The spoken word section lacks vocal style and is completely mismatched with the alternative instrumentation, and the faux-dubstep chorus is quite jarring. Still, taking chances is better than playing it safe, and production choices like the lo-fi guitar on "Never Ever Give Up" and the familial cuteness on "Becoming Me" provide sonic depth to this album.

West has undoubtedly added another solid batch of tunes to his already expansive discography. There are likely going to be elements here that most people won't find suitable to their liking, be they electronic or experimental, but fans will likely stay for the engaging narratives and heartwarming positivity.

CCM's beloved storyteller Matthew West is back with All In. With his seventh studio album West builds on the infectious positivity of 2015's Live On Forever, but pulls it off without being cheesy. Some tracks work better than others, but with highlights like "Mercy Is A Song," "Amen," and "The Beautiful Things We Miss," you can't go wrong here if you are looking for a solid CCM album. - 9/20/17 Christopher Smith
class="coversize" align=right> In "The Sound Of A Life Changing," from Matthew West's new album All In, the songwriter references seeing Steven Curtis Chapman in concert as a young man, and feeling the pull of the Spirit to write songs and pursue music full time. This mention of SCC is apt, in that West has become a dependable and beloved songwriter in the same mold; one who is capable of making familiar and surprising albums all at the same time.

All In features some great sonic textures in the same vein of a band like Coldplay or OneRepublic, yet never leaves the solid songwriting and heartfelt storytelling that has come to be West's trademark. The album is one to look out for, and an encouraging journey from start to finish. Make sure to put it into high rotation as the Fall turns into winter... - Preview Review date: 9/12/17, written by Alex Caldwell of Jesusfreakhideout.com --->