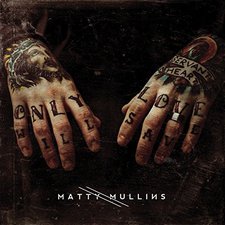 
Metalcore stalwart Memphis May Fire was formed in 2006, but it wasn't until 2008 that current lead vocalist Matty Mullins joined their line-up. After four studio albums under their belt, Mullins decided to release a solo record through his bands record label, Rise Records. This album, aptly titled Matty Mullins, showcased Mullins foray into the Christian music scene which was a departure from the type of music fans of Memphis May Fire were accustomed to. But they needed not worry, as Mullins delivers an album chock full of passionate, engaging music that even those who aren't necessarily a fan of metalcore can enjoy.

The album kicks off with "See You in Everything," a mid-tempo song that sees Mullins sing about how God's presence is felt and seen everywhere around us if we just open up our eyes and look around. It's a great opening song, and right off the bat we can tell that this album will be less heavy and more poppy than Mullins previous outings with Memphis May Fire. Following that is the albums lead single, "My Dear," a song which highlights the fact that God always has a plan for us and will always be there for us. Mixing pianos in with the guitar riffs and drums gives the song a more ethereal feel, and it's easy to see why it was chosen as the lead single. The third track, "Right Here, Right Now" deals with living in the moment and taking things one day at a time, while "More of You" is a faster tempo song about trusting in God and giving him control. Mullins sings, "On my knees I'm crying out / For more of you and less of me / This is how it's supposed to be / Now I see you oh so clearly" showcasing his passion. Following that we are treated to "Speak to Me," a song talking about wanting to listen to the word of God, and asking for God to speak to him. While thematically the song brings nothing new to the genre, it's still a solid song nonetheless.

The back half of the album kicks off with "Back to Square One." This song deals with wanting someone to care enough about them and see the best in them when they realize that in the real world those they thought were their friends were actually their enemies. "99% Soul" and "Come Alive" both ramp the energy back up as Mullins sings about wanting to be like God, using the term 99% Soul as a metaphor for the Holy Ghost in the former, while singing about breaking free and coming alive in the latter. Thematically "99% Soul" stands out as one of the better tracks on the alum. "Come Alive," on the other hand falls a bit flat. "By My Side" brings things back down to mid-tempo with Mullins singing about being able to anything with God by his side, while the final two tracks "Normal Like You" and "Glory" slow things down even further. On "Normal Like You," Mullins sings about how Jesus' sacrifice was a "blessing in disguise," singing "Call it a blessing in disguise / You're not the one who feels the pain behind their eyes / I'll take hit, I'll wear the bruise / But all I ever wanted was to be normal like you." "Glory," which thematically and lyrically is the most worship-like song on the album, talks about knees bowing, skyscrapers crashing down, and feet lifted off the ground all to glorify God. It's a fitting end to a solid first solo outing by Mullins.

All in all, the entire album is solid from head to toe. While some tracks like "My Dear," "99% Soul," and "Glory" stand out over the rest, their truly isn't a "bad" song on the CD. This will appeal to both fans of Memphis May Fire as well as those who aren't a fan of the screaming that Matty does on most Memphis May Fire tracks.