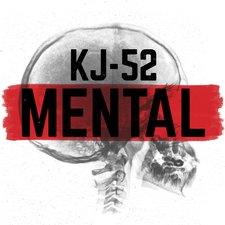 He's gone from being the "Christian alternative" to Eminem to being one of the most prolific and popular rappers in the industry. Always a polarizing figure, people haven't exactly known just what to do with KJ-52 and his alternately brutally honest and plain-fun styles, but it has not stopped him from producing copious quantities of music over the past decade and a half. But with the meteoric rise of Christian Hip Hop in the mainstream, KJ has been seeming to be the odd man out; not that his popularity has declined, but that his audience hasn't exactly picked up a ton of steam. This is especially true since his biggest target audience has been young adolescents, and so his audience kind of turns over after every few years. But no matter his audience, he has always hit them hard with both the Gospel message and stories from his life. And now, after nearly two and a half years, KJ is finally back with new music to follow up 2012's Dangerous, taking the form of this nine-track EP, Mental.

What KJ has offered up with Mental is, at least to this reviewer, something that we haven't quite seen from him before. First, it is his first batch of new music in a long time that has not moved in the direction towards pop or rock. Instead, as bluntly indicated by the two "Gameface" entries and the title track, KJ has opted for more beat-powered, blood-pumping hip-hop tracks, straight-up danceable ones ("It's Goin Down," the opening track off Dangerous), or something we might hear in a sports arena (indeed, ESPN just started using "Tonight" from this EP). Production-wise (with production provided by Soul Glow Activatur, formerly of Family Force Five), it sounds a lot more like something we might hear from Reach Records than KJ's past catalogue.

Which, frankly, makes sense as Reach just managed to put an album on top of the Billboard 200 (and so it is a proven sound that is known to sell). The collaborations like Lecrae, Tedashii, Propaganda, FLAME, and KB are also indicative of the musical direction KJ is trying to achieve, as KJ seems to clearly be trying (as he has basically done since his start) to put a distance between himself and the "white rapper" stereotype he has had to deal with his whole career. Album highlight "Fight Music" is definitely a not-so-subtle address against this treatment ("I don't do black music / I don't do white music / I do fight music / Unified in Christ music"), and I also find it fitting that the follow-up is another album highlight with "Island of Misfit Toys," as encouraging a track as KJ has ever made ("This is for the misfits, rejects, losers, defects / weirdoes, awkward, broke-down, strange kids / don't you forget, you are loved"). Of course, it could not be a KJ album without a fun track like "Fresh Kicks," as Mister Five-Tweezey shows off his new shoes.

To be perfectly frank, Mental does not really sound like something I would have expected KJ to make, and it is way too easy to pin him as simply trying to morph his sound into a mold that sells better, but it would be unfair to the quality of Mental to do so. Production-wise, KJ has never sounded better, and his raps are also tighter than ever. He also remains absolutely firm with his Gospel message as he always has, and his storytelling ability (although that aspect of KJ's music was downplayed a bit on Mental) remains his chief draw. The fact that there are only five new tracks is a little bit of a letdown after two and a half years of silence, but they are quality, and the tracks revisited make sense in the context of the EP. I think it is safe to call Mental one more step in the evolution of Mister Five-Tweezey, and a good step at that.

With his Friday freestyles, constant touring, and a reputation for putting out good music on a regular basis, KJ-52 has solidified himself as a staple in the Christian hip hop scene. This lengthy EP is hopefully just a foretaste of a new album that fans are anxiously waiting for from KJ. Known for uniquely blending humor and Jesus while being able to speak on serious matters, KJ always has something to offer in his albums for all hip hop fans, and Mental is no different. The EP starts with "Gameface" (one of two versions), featuring the first of an all-star collaboration effort. This track includes KB and Soul Glow Activatur, setting the stage for later appearances from Tedashii, Lecrae, Flame, and many others. Both "Gameface" tracks are stellar, with great production and solid rapping, while "Fight Music" and "Fresh Kicks" nicely keep the focus on Jesus above all. The best sound to my ears was "Island of Misfit Toys," which features Social Club and SPZRKT, with a message to those struggling with their self-worth and personal value, reminding them of God's amazing love. The hook of "Don't you forget, you are loved, you are loved, you are loved" tells all of the "rejects, misfits, and outcasts" that in God's eyes, we never have to be alone or question our worth. The outcome is an extremely powerful and relevant song. Overall, this is an EP that - by just its length alone - will leave most listeners wanting more. Not every track is perfect, but fans of KJ and hip hop in general can't go wrong grabbing this. It's a listen full of solid beats, great collaborations, and a positive focus on the Creator. - Review date: 10/13/14, Kevin Hoskins