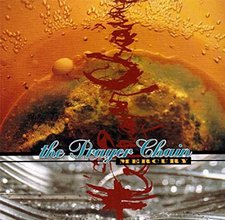 
The Prayer Chain's third full-length record (including the independently released The Neverland Sessions) changed a lot of things. Their sound went from the high energy songs found on Shawl and The Whirlpool EP to the slow burn, moody atmospheric sound found on this record. I'm sure that producer Steve Hindalong had a lot to do with this, as well as it being the band's vision to break the mold of what they had done on previous records. And break the mold they did indeed. The energy of "Dig Dug" and "Like I Was" off of Shawl are replaced by meandering, slow rockers with Middle Eastern tones and percussion throughout, with the only exception being the second track, "Waterdogs."

Does it work? Absolutely. I remember when this record came out, there were some negative reviews centered around the change in sound. I myself didn't know what to think of it at first, but after a few listens, I knew it was something special. For me, it changed what a Christian rock record could be.

Mercury starts out with "Humb," which is taken from Psalm 136. It's an ambient track that essentially works as a call to worship. "Waterdogs" picks up the pace as the only straight up rocker on the record. That doesn't mean there is a lack of guitars on the record, however. On the contrary, there is some of the best guitar work you will ever hear on Mercury -- understated and not showy, but ever present. The drums and bass are also some of the best put on record. Hindalong's production is spot-on, with clear mixing by Chris Colbert, Gene Eugene and Mark Rodriguez make this an easy listen.

Lyrically, it's hard to know what's going on here. "Creol" appears to be about death, with the lines "come to smell your breath/wiped over" and later "slow end/slow grave." "Shiver" is clearly about salvation, "long ago/sin pumped through my veins/long ago/the blood washed it away." "Sky High" seems to be about the loss of innocence and how time changes things with the line "Here comes the rust." Space seems to be a metaphor about the distance from God and/or people.

In the end, this is a great record -- not just a great Christian record, but one that can hold its own against any mainstream record out there. Me giving it five stars may appear to be to generous as there are not many five star albums out there, but it's just that good. It was largely passed over because it doesn't fit neatly into the CCM template, which is a shame. Do yourself a favor and take a listen to The Prayer Chain's Mercury.