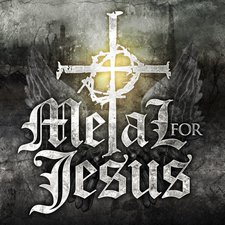 
For those whose tastes tend toward the softer side of the musical spectrum, the Metal for Jesus album would appear to be nothing more than a compilation of hard-rocking tracks by five different groups. While that description would, in the strictest sense, admittedly be correct, listeners more familiar with Christian metal music and its multitudinous sub-genres will be quick to note that the release actually functions as something of a career retrospective given that each of the bands represented are united by a common thread: Swedish-born Christian Liljegren, who handled vocal and songwriting chores for all five of them.

This same difference in assessment will likely hold true in terms of one's opinion of the project itself. Fans of heavy orchestration, lightning-fingered fret work, and unmistakably inspirational-themed lyrics will likely find much, if not most, of it at least partially to their liking. On the other hand, those who heard Christian rockers like Barren Cross, Bloodgood and Stryper back in the '80s and wondered what all the fuss was about will probably dismiss the anthology out of hand, regardless of how it winds up being labeled.

Looking at the effort objectively, Metal for Jesus does boast the occasional bright spot. The chugging guitars and relentless pace of cuts like "Open Your Eyes" are difficult not get swept up into. And "The Way" finds Liljegren and his cohorts in Audiovision bending the venerable Stryper classic into a slightly more symphonic mold with pretty fair results, particularly at the beginning and end of the proceedings, where the talented vocalist unleashes a very convincing Michael Sweet-like wail.

That having been said, tracks like "Down on My Knees," one of the more straight ahead hard rock tunes, will strike some as more a parody of, than a tribute to, the hard rock they grew up with during the Bon Jovi/Warrant/Winger era. And the lyrics of songs like "We Will Go" ("On the road again/ Playing for the Lord/ From town to town/ We will rock the house"), and several others, will likely strike a large percentage of even the most charitable members of the listening audience as far less than ground-breaking.

In its defense, the compilation does boast some historical merit, given that it chronicles Liljegren's stylistic metamorphoses and detours over the period of roughly a decade and a half. That being said, longtime fans likely already own all the material on the compilation, naysayers aren't likely to be won over by what they hear here, and even those in the hard music crowd will likely find little to differentiate Metal for Jesus from - or elevate it above - the lion's share of works by any number of other like-sounding artists. All of which means that, despite its generous length and the presence of a handful of noteworthy cuts, the collection remains a recommended purchase only for completists and die-hard Liljegren devotees.