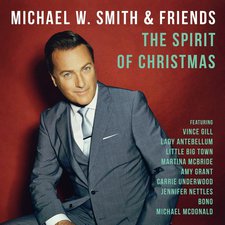 It has been quite a busy year for Michael W. Smith. After not releasing any new material since 2011 (and even that was an instrumental album), this year he has already put out a hymns album in March, a studio album in May, and now a Christmas album in September. But if outside collaborations and working with new faces were the calling card of Sovereign back in May, The Spirit of Christmas puts that one to shame; here, it is not so much the fact that this is Smitty's fourth quality Christmas album that draws people towards it, but the people he collaborated with to make it.

Carrie Underwood. Lady Antebellum. Little Big Town. Vince Gill. And more. These are some huge names in the realm of Country music. And not just Country, as Bono, Michael McDonald, and longtime collaborator Amy Grant make appearances as well. Indeed, I doubt many albums made by Christian artists can boast a lineup as acclaimed as this (which is so star-studded that the cover declares this as an album from "Michael W. Smith & Friends"). Plus, Smitty has brought back the full orchestra to create the full and overwhelming sound that he loves to give listeners. Smitty has never made a project as "big" as this, and that is saying something for a man who made projects like Worship, and Worship Again. But even big bells & whistles are just bells & whistles when it comes down to it, and in making a project involving so many huge names, the risk obviously becomes that the added frills and thrills distract too much from the purpose and quality of the final product. Does this happen here? Well, frankly, kind of, but thankfully not as much as one would fear. The inclusion of guest features isn't as natural as, say, Jars of Clay's collaborative project The Shelter, but it certainly doesn't turn into a hodgepodge of cameos akin to Kenneth Branaugh's 1996 film version of Hamlet (a great film nonetheless, though).

And the features do not distract from the natural progression of the album either. Smith has said that he designed the album to have three acts based on the progression of emotions and focus one feels during the Christmas season, and it really comes across. Beginning with the instrumental "The Miracle of Christmas," and on into the timeless jazzy sound of "It's The Most Wonderful Time Of The Year" and subsequent tracks, Smith banks heavily on nostalgia and childhood memories through the first act of the album. The segment does exactly as he hopes, with the exception of the Andy Williams cover "Happy Holiday/Holiday Season" (unfortunately Smitty's trademark vocals just can't pull off whimsical lyrics like "Whoop-de-do and hickory dock / And don't forget to hang up your sock /'Cause just exactly at twelve o'clock / He'll be coming down the chimney, down").

The transition to the second act (the recollection of Christ as the primary purpose of celebration) is the Home Alone theme "Somewhere In My Memory," a heavily nostalgic song which starts turning the listener's attention towards deeper, more lasting themes of Christmas (complete with the adorable, imperfect vocals of Smitty's 7-year old granddaughter Audrey). The transition is fully realized in the instrumental medley of Christmas classics, "The Spirit of Christmas" (which will remind longtime listeners heavily of Smith's previous Christmas projects). By "Silent Night" and "What Child Is This," Smith has transitioned back to a fully-Christ-focused Christmas, including the album's quintessential highlight (and only original new song), the tense "Almost There" with Amy Grant.

With "All Is Well" (originally from Smith's first Christmas album in 1989, and featuring a stirring performance from Carrie Underwood), the album has begun its third act, which directs the listeners to the intended result of the holiday season. Smith wraps up with a new rendition of his 2007 hit "Christmas Day," the reflective (though all-too-short and admittedly rather out-of-place) spoken word piece "The Darkest Midnight" with Bono, and the stirring Michael McDonald/Beth Neilson Chapman cover, "Peace."

As full of charm and nostalgia as any of Smitty's other Christmas records, The Spirit of Christmas is nevertheless very different in execution, in telling something of a story through its progression from being nostalgic, fun and whimsical to reverent, reflective and worshipful. That in itself makes this album worth getting, even if some distracting features like Vince Gill, Lady Antebellum (both of whose styles simply don't mesh all that well with Smith's), or the out-of-place and underutilized Bono, get in the way of its full potential. But in the end, Smith's nostalgic and star-studded Spirit of Christmas is easily a worthwhile purchase to add to your Christmas collection.