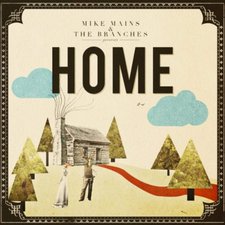 I first heard of Mike Mains & The Branches about two years ago when I caught a whiff of their single "Stereo" (Confession: they're probably the last band I have checked out based on something I heard on the radio). After I casually looked them up, I made the mistake of not delving into their first version of their debut album, Home. But after checking out the quartet from Gainesville, Texas again, I'll admit, I was missing out.

Although the band has the indie rock sound down, some of the tunes, like "Stereo," are radio accessible. The lead vocals are a bit more unique than usual, but the results of his voice take nothing away from the album. Upbeat, indie rock songs like "Matches" and "Stereo" are catchy and insanely smart and are outstanding bookends. "Stop The Car" isn't quite as clever, but it's a fun, upbeat track that quickens the pace of the album in the ideal spot. "Emma Ruth" acts as the album's true ballad, and the emotional song relies heavily on the piano before it rises to a stirring crescendo.

The other half of the album has a distinctly indie feel to it with elements of pop and rock added in. "Beneath The Water" is a more serious guitar driven song with the most aggressive vocals, while "Lady Love" is an enjoyable, laid-back, dreamy pop ballad. However, although "Rush You" has a solid start, its repetitive chorus is its undoing. The lack of creativity and the repetition in the refrain also doom "Love."

As good and imaginative as the music is throughout the album, the songwriting is probably better. The band often weaves a lot of points underneath their song's central theme. The band doesn't pull punches when pointing out our selfish personal lives when compared to our spiritual lives in "Miracle" ("Don't you know that your body is a temple?/ how bout you make a little room for me?"), while the singer in "Drifter" asks for redemption ("tear me down again and build me back anew/Rid me of myself and fill me up with you"). "Beneath The Water" and "Stereo" all have strong spiritual themes worth considering, and the band covers a couple of relational issues as well in "Stop The Car" and "Lady Love."

One of the more straight forward songs, "Emma Ruth," is about the singer's desire to see his loved one again in heaven while wishing he had additional moments on earth with her. The song is a reminder of both how this world is not our home, and how we should use our time with those we love wisely (I won't touch on the possible theological inconsistencies of the line "I will live to go to you").

If the album has one flaw, it's that I'm not sure there are too many songs on Home are flat out outstanding. For me, I'll play "Stereo" and "Matches" over and over, but the album is meant to be spun as a whole. And that's where the album succeeds. Any wrongdoing Mike Mains & The Branches commit, it's overshadowed by superb songwriting, both musical and lyrical. This re-release is one of 2012's best indie rock albums.

Mike Mains & the Branches have been quietly tearing it up in the independent music scene for the past couple of years, garnering a vast array of fans and getting considerable amounts of airplay on well-respected Christian radio stations like RadioU. They independently released an album called Home back in 2010, and now, with a new national distribution deal, have re-released said album on a wider spectrum. It's a little disappointing that Home-version-two is three tracks shorter than its original incarnation, but the quality of the ten songs that are still present make up for it. There's a reason Mike Mains & the Branches have been widely celebrated: they're dang good. With music in the vain of Copeland, Manchester Orchestra and The Arctic Monkeys and a voice like that of Micah Boyce from so long forgotten, it's easy to recommend Home to indie rock fans. "Stop the Car" is among the highlights, with a fun rock and roll sound that captures their essence perfectly. The same can be said for their hit single, "Stereo," which is the song that you've probably heard if you've heard anything from these guys. It combines indie rock guitar licks with a catchy, pop rock hook to make an engaging and somewhat unique sound. It's hard to combine pop and indie rock, but it's done very well here. To add to the list of highlights, there's also "Beneath the Water," which serves as a bit of imagery for what the human spirit might go through during a water baptism. It's a terrific reminder of the change we go through as we rise from our sinful nature into life. Again, Mike Mains & the Branches' Home is a terrific recommendation to fans of indie rock music. Whether you pick up this version or the original version with the three extra songs, you'd be doing yourself a service to have it in your music collection. - Scott Fryberger, 7/11/12