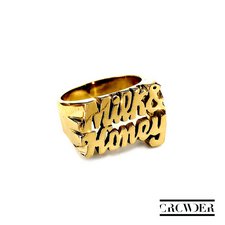 
It's hard to believe that creative mad man / worship leader David Crowder is heading into his fourth decade in music. (His first few independent releases go as far back as the mid-to-late 1990's.) He is now one of Christian music's elder statesmen (or more like your beloved, wacky uncle) and always a welcome voice when he returns with a new batch of tunes, whether it was in his "*Band" days, or in his most recent incarnation as the artist simply known as "Crowder".

His Crowder albums have been a bit more straightforward in their musical approach than the David Crowder*Band, but they are no less fun, inspirational or foot-stomping. And his latest, the wonderfully titled Milk & Honey, is a welcome return from this hirsute worship leader.

Kicking off the album is current radio single "Good God Almighty," a song that features one of Crowder's best party tricks. It's a fun, zany number that is equal parts joyful and worshipful. Taking the distinct southern expression "good God almighty" and turning the oft-used phrase on its head, Crowder takes the literal approach with the song: "Good God almighty / I hope You'll find me / Praising Your name no / matter what comes / 'Cause I know where I'd be without Your mercy / So I keep praising / Your name at the top of my lungs / Tell me is He good? (He's good) / Tell me is He God? / (He's God) / He is good God Almighty." The song has a familiar Southern Gospel feel with a hipster twist that shows Crowder's cross-generational appeal.

The following "In The House" traces this same pattern in that it feels fresh and familiar all at the same time, like that rousing hymn that you feel like you know, but just can't place. Likewise, with the mellow "He Is," which slows things down for a downhome "altar call" sort of tune (with a great banjo and gospel choir accompaniment) that shows this side of Crowder at his finest.

But it's on the epic title track that Crowder shines brightest. With a slightly menacing banjo and stomp box intro, the song builds up the tension in the fiery way that Crowder has made his trademark for so long. Weaving an Old Testament metaphor (the Biblical promise land of Israel being called the land of "milk and honey") into a southern gothic groove, the track is just about the best example of what Crowder has done well for so many years.

Much of the rest of the album runs the gamut of familiar Crowder fare, the hip hop groove of "Higher Power" with guest rapper Hulvey, the R&B flow of "Better Than Sunshine," and the hillbilly shuffle of "Glory, Glory (God Is Able)." Yet, as familiar as it all is at this point, there is still a freshness that Crowder's enthusiasm for musical genres brings to the table.

And that's been Crowder's strongest artistic muscle all these years: the ability to mix and match eras and genres into a musical stew that is all his own. Add to this his tunefulness and passion for bringing creativity to worshiping the Lord, and it's easy to say, "here's to a few more decades!"

Milk & Honey may not be groundbreaking next to Crowder's own impressive musical history, but it is no less welcome a return.

Crowder has consistently been one of the more creative forces behind the modern worship scene, adding a certain layer of depth to his albums and music where other bands/artists settle for less. And that makes Milk & Honey a somewhat disappointing album. Crowder shies away from some of the swamp rock and bluegrass that's been on his previous work and leans into the gospel and hip hop elements instead. In fact, this album feels more like a gospel presentation than a worship album, with one song ("Better Than Sunshine") addressing the listener more directly. While it's refreshing to hear such a gospel-centered record, the songs themselves lack a certain flair or "fun factor" that he's had previously. Some of the lyrics feel cliche or cheesy (like "We lions, not cowards!" from "Higher Power") and at times the music feels too familiar and stale.

Maybe that's a result of recording it during a pandemic, where he couldn't be around people more and feed off their creativity. The album's not a complete dud. Several songs are definitely earworms and the lyrics (in spite of their shortcomings) have some powerful moments (like on "God Really Loves Us" and "The Anchor"). Crowder's longtime fans will likely enjoy this work, and the radio folks will definitely like the singles released. With a track record like Crowder's, such an album may be disappointing, but hopefully is just a small pothole on a road that is otherwise one of the most scenic in all of CCM. - Review date: 6/10/21, John Underdown of Jesusfreakhideout.com