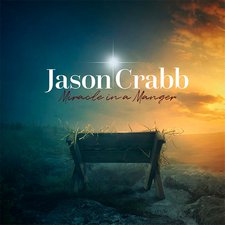 Jason Crabb
Miracle in a Manger


Jason Crabb is a 2-time GRAMMY winning and 22-time GMA Dove award winning vocalist. Throughout Crabb's career, he's always blurred the lines of many genres from christian to jazz, to country and more. Jason's newest Christmas album, Miracle in a Manger, is an eclectic collection with sounds ranging from blues/rock, standard CMM, jazz, gospel, and even a surprising hint of R&B. The track listing equally balances out classic Christmas carols and hymns, CCM standards and covers, as well as original works.

This variety is evident right from the top. The bluesy guitar licks of "Go Tell it on the Mountain" opens the album well, which leads into the modern CCM feel of the original "Who Could've Known," right into the jazzy Christmas standard "Most Wonderful Time of the Year," into what could be the most popular CCM Christmas song of all time in "Mary Did You Know," and then to the gospel influenced "Joy to the World." These five songs give you a good taste of what to expect from the second half of the album and the variety in sound and types of songs is a bit refreshing as Christmas albums can often became stale and start sounding too much alike. The title track sits right in the middle of the album and shows Mary marveling at what being the mother of Jesus really means. When you think about it, it almost stands in contrast to "Mary Did You Know" -- or perhaps more of an answer to that question. In the chorus Jason sings, "It's a miracle in a manger; nothing more sacred, nothing is stranger. Hope for the world; the promised Savior. A miracle there in a manger."

The R&B flavored (more 70s/80s era) "Being Home For Christmas" is probably the most surprising (and personal favorite) song on the album. Only (admittedly) vaguely knowing Jason's background coming into this, it caught me completely off guard. However, not only does the song sound fantastic and have a wonderful message about spending time with family at Christmas, but Jason's vocals may also sound better here than anywhere else on the album -- and he's a very strong vocalist. Another surprise of sorts comes with the cover of Chapman and Grant's "Tennessee Christmas" -- made popular by country music stars Alabama. It may be a regular holiday song for fans of Amy Grant or Alabama, but it's not necessarily a widely known or recognized song. In the final two tracks, Jason hits you with another fun and jazzy standard in "Let It Snow" and then closes things out with the Christmas-essential, "O Holy Night." There are so many iterations and versions of the closing track, but Jason does a great job of standing in there with some iconic performances.

Jason Crabb's Miracle in a Manger is a surprising and enjoyable Christmas album to listen to as we get closer to Christmas Day. It's no surprise that this is a good album, but it was surprising to see the depth and variety that Crabb offers to the listener. As mentioned earlier, a lot of Christmas albums come off as boring, repetitive, or just same-sounding. Instead, Jason offers up something for everyone here and tries to add as much value as he can to the experience. Fans of Christmas time and Christmas music will definitely want to give this one a listen -- especially if they like Jason and/or The Crabb Family.