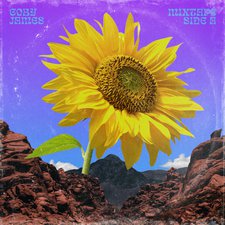 
Life's inevitable turning points always bring along with them a mix of emotions: nostalgia, uncertainty, hope... sometimes fear. For Christians, these times can be times of reflection on our life in Christ. Coby James is still at the beginning of his life and career, but his faith and music has already led him through one such turning point: transitioning from adolescence to adulthood. Mixtape: Side A is a soundtrack to this transition.

The EP opens with the whimsical "Castles," which focuses on the importance of God as our foundation by drawing on childhood experiences. The theme is an important one, though the lyrics feel a bit contrived at times. Musically, the song is stronger, with its R&B-influenced bridge, drawing on lyrics from the old hymn "My Hope Is Built on Nothing Less," standing out the most alongside James' charming guitar solos. The next track, "Simple," finds James dealing with regret, and yearning for the innocence of his childhood. "Oh when did I lose myself?" he questions. "How'd I get so numb, so cold / Living the life that I chose?" The song is an excellently-written lament of the human condition. "Golden" is the least exciting track on Mixtape: Side A, with lackluster music and lyrics. However, the closing song is where the EP really shines. "New Roots" is a beautiful ballad of hope where James finds peace in his future by remembering God's faithfulness through good times and bad times. The second verse really hits home as the theme of the album, "I'm still a child of a God who is with me / With every end comes a brand new beginning." These powerful lyrics are aided by excellent instrumentation, which climaxes in the album's emotional peak with energetic drums, swelling strings, and a gospel-esque background choir. Vocally, James once again shows his vulnerable emotion in a performance that reminds this listener of "Happier," a single from his first EP.

Mixtape: Side A isn't perfect, to be sure. "Golden" feels out of place and flat compared to the rest of the songs on the album. Additionally, James still has room to grow in his songwriting, but this listener appreciated the way he scaled back some of the songs this time, hearkening back to his self-titled EP and allowing his skills as a guitarist and vocalist to shine through. Overall, in Mixtape: Side A, James draws listeners in with an unusual musical charm while managing to deliver an honest, Christian perspective on living through life's changes.