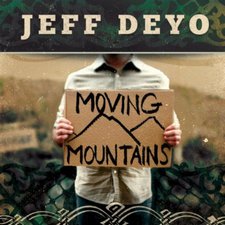 For the past five years Jeff Deyo has been busy doing several things, but they haven't included recording new material. Whether it's teaching classes at North Central University or putting on his worship academy, Pure Worship Institute, Jeff has remained busy serving his creator. Now after the longest span in his career without releasing album, Jeff has completed Moving Mountains. So the question revolving around Jeff's latest is: Will one of the pioneers of modern worship music release a noteworthy album, or will the five years of inactivity yield something stale?

Moving Mountains finds Jeff in a different place in his life than previously. Much of the album is on the mellow side with only a couple of more upbeat songs. The album calls out simple truths in every song such as in "Love is Who You Are" as he proclaims, "God You are love; love so deep, deep and mighty. God You are love; love so pure, pure and holy." The record is mainly inspired by the sad state of our society, our overwhelming need for Christ, and the lack of faith we have as the human race. Even the album title calls to Christ's statement of faith, and our lack thereof, found in Matthew 17:20.

Musically, it's not the most creative album you can purchase, but it is more interesting than your standard worship record by many popular acts. More than anything, you can see Jeff's heart for our dying and unbelieving world as he cries out repeatedly in the album. The high points would be in the fast moving "We Delight," the powerful "Shake This Place," the simple-yet-poignant "King of Worlds," and the album's closer, "Come Alive." This may not be Jeff's best overall collection of songs, as I still find myself spinning his earlier work from time to time, but most of the songs seem necessary for today's world, thematically speaking.

After five years of focusing on other ministry avenues, Jeff Deyo is still showing he knows what it means to worship his Savior and seems to have an even bigger heart for bringing others to Christ. Jeff's career has been an interesting one and he has done a solid job of crafting modern worship songs (especially when he had no thought or desire to do solely worship music when he joined the alt-rock band Zilch so many years back). If you are looking for some new worship tunes that haven't been re-recorded and covered fifty times over, you won't want to pass Jeff Deyo up as the "old guy on the block." Don't expect to have your mind blown with a completely fresh sounding set of songs, but you just may find yourself pleasantly surprised with Moving Mountains; it's nice to have Jeff back in the fold.