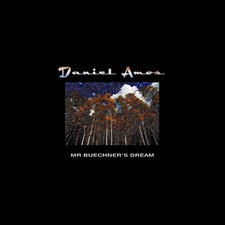 Front man Terry Taylor and his cohorts in Daniel Amos have been together, in one formation or the other, since the mid-1970s. Putting their longstanding association into perspective, when the group's self-titled debut long-player first hit the shelves in 1976, unleaded gas was 60 cents a gallon, Jimmy Carter was still a year away from taking his seat in the Oval Office, soon-to-be Apple Computer co-founders Steve Jobs and Steve Wozniak were still building prototype PC boards in Jobs' garage, and rapper-turned-pop-superstar TobyMac was just beginning his second semester of fifth grade. Even as early as the next full-length, 1977's Shotgun Angel, though, the group began to leaven the country-rock of the first record with straight ahead rock and roll fare. Between 1978 and 1995, the band put out a fairly regular stream of albums, each of which added one or two new wrinkles to their ever-broadening musical palette.

Released in 2001 (and recently reissued), the two-disc Mr. Beuchner's Dream, as much as anything else, works as a sort of summary of that which has transpired in the band's musical development, and that of the music world in general, over the previous three decades. The opening cut, "This is the One," will bring a sparkle to the eyes of those old enough to remember Pet Sounds-era Beach Boys. "The Author of the Story," on the other hand, is a raw, droning, riff-driven piece that sounds like a lost artifact of the late '60s psychedelic movement. "Over Her Shoulder," with its languishing, laid back instrumental portion, is pure Tom Petty and the Heartbreakers, right down to Taylor's spot-on Petty vocal impersonation. "A Little Grace" could well have been a working demo for Sam the Sham and the Pharoahs' 1965 garage rock classic, "Wooly Bully." And the genre-defying "Faithful Street" sounds like Burt Bacharach covering The Beatles with Herb Alpert & the Tijuana Brass on instrumental support.

Taylor has always been a songwriter's songwriter, and he is as lyrically witty, incisive and on-point as ever on Dream. "The Staggering Gods" is a convicting, spot-on assessment of the tendency toward modern-day idolatry. Conversely, track titles such as "Over Her Shoulder," about Lot's wife, and "Pregnant Pause," which details Abraham and Sarah's crisis of belief, find Taylor's tongue-in-cheek humor undimmed by the passing of time. Lest he seem perennially jaded or too clever for his own good, though, "My Beautiful Martyr" finds the DA cooperative crafting a beautiful acoustically-driven tribute to the subjects of its title. "Flash in Your Eyes" is a heartrending acknowledgement of the passing of Taylor's Swirling Eddies band mate, Gene Eugene. And the uplifting encouragement of "Small Great Things" ("They moved a mountain/ With fumbled prayers/ And bloodied knees") may just be the perfect balm for those struggling with what they consider an "imperfect" faith.

In fairness, Taylor's voice still takes getting used to for the uninitiated. Similarly, Dream's tendency to shift musical gears may be a bit off-putting to some. Those who loved the Beach Boys-leaning textures of "This Is the One" and the title cut aren't likely to be so favorably disposed toward the early '80s New Wave aesthetic of the Devo-like "Easy for You." Alternately, those who consider the Rolling Stones-inflected "Your Long Year" and "Ordinary Extraordinary Day" all the rage may find songs like "I Get to Wondering," "Faithful Street" and "The Tale You Told" far too twee for their taste. While they arguably may be onto something in the latter case, the deliberate contrasting of styles is the very characteristic that renders the project such an interesting proposition in the first place. After all, even the Beatles White Album, a similarly eclectic, long-running latter-career effort, was, among other things, a fascinating study of shadow and light, placing harder-rocking classics like "Helter Skelter" and "Back in the U.S.S.R" alongside charmingly ephemeral pieces such as "Martha My Dear" and "Ob-La-Di, Ob-La-Da."

That said, just as the White Album wasn't nearly The Beatles' magnum opus, Dream isn't nearly the defining DA work. Indeed, endearingly ragged as it is, the double-disc set is too long for most single sittings and a judicious trimming of the weaker and more whimsical-sounding compositions would have taken a good thing and made it that much better. Of course, given the fact that, at the time it appeared in 2001, the group hadn't generated any new material in over half a decade, such proliferation, no matter how spotty, was rightfully well-received and certainly an appreciated tonic for fans who secretly wondered whether they'd ever hear from Taylor & Co. again. And this applies doubly for the 2011 rerelease, which came over a decade after the record's original street date, with nary a peep from the DA camp to tide them over during the intervening years. To be sure, Mr. Buechner's Dream's copious length, while admittedly as much a liability as it is an asset, nevertheless guarantees something to love for both fans and newcomers alike - and plenty of it.

Disc Two: And So It Goes (The Second Collection)