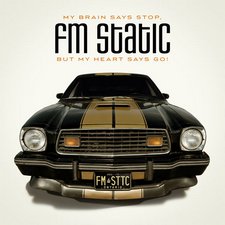 It's difficult to think of too many side projects by popular artists that have spawned any sequels. It's even more difficult to come up with a side project that has spawned second or even third sequels. But in the case of FM Static, the side project from Trevor McNevan and Steve Augustine of Thousand Foot Krutch, they have become popular in of itself, and the duo are ready to release their fourth album, My Brain Says Stop, But My Heart Says Go!.

To follow up their accomplished concept album, Dear Diary, the group moves into a more easy-going style. The light-hearted, pop rock/punk music is far more energetic than the band's previous album, but the lyrical depth does suffer. The project begins with the title track, which works as a catchy tune with a slight hip-hop feel, but it's hardly groundbreaking. Likewise, while the tune is infectious, the cheerleaders in "F.M. S.T.A.T.I.C." are reminiscent of fellow Canadian act Hawk Nelson's "Live Life Loud." The sixth track on the album, "Cinnamon & Lipstick" is another solid upbeat song, but fans of Everyday Sunday may enjoy it more than traditional FM Static fans. Compared to the first two FM Static installments, Dear Diary didn't have as many danceable tracks, but, "(Hey) I Want It" and particularly "U Don't Know Me Like That" are snappy punk/rock tunes. Aside from the piano fueled "Last Train Home," the ballads on this release feel a little lacking ("Lost In You" and "Inside Out").

My initial reaction to the chorus' of "My Brain Says Stop, But My Heart Says Go" and "(Hey) I Want It" (Or lack thereof) along with the rhyming of "crescendo" so you can get to "Nintendo" in "F.M.S.T.A.T.I.C." was to throw the album under the bus. But those who can forgive the over-the-top lyrics are rewarded with some positive and bright messages. Though the lyrics rely heavily on pronouns, the blanks left in several of the pair's songs are easily filled with Jesus. "Lost In You" takes on the function of a worship song ("I've seen you many place/And I still feel the same/Your love's electric/I can feel it when you touch me") and "Breaking Me" has a similar vibe. "Black Tattoo" goes into slightly uglier territory when encouraging a girl move on from her past, while "Last Train Home" documents the ups and downs of friendship.

The good news is that My Brain Says Stop, But My Heart Says Go! is already the best upbeat pop-rock album of the year. The bad news is that the competition thus far hasn't been that stiff. Although the lyrics are far deeper than the band's debut record, What Are You Waiting For?, the themes eight years later fall short of Dear Diary. Still, there is a lot of fun to be had here while we await the next Thousand Foot Krutch album.

Side projects are very interesting to see unfold, especially after years of development. From the vocalist and drummer of Thousand Foot Krutch spawned the long-time-coming pop-rock outfit FM Static, and four albums later, Trevor McNevan and Steve Augustine's brainchild is still going strong with My Brain Says Stop, But My Heart Says Go! For those who have been following the band since their debut, it is apparent that the band has decided on a more structured sound, taking the next step towards wider accessibility that Dear Diary began. While some aspects of the record seem a bit simplistic, such as the chorus of thetitle track ("oh oh oh's" don't qualify as legitimate lyrics) and the somewhat predictable song structure throughout the project, the "fun album" concept is completely intact in one of its catchiest forms. From the cheerleader chants of "F.M.S.T.A.T.I.C" to the youthfully reminiscent "Cinnamon & Lipstick," My Brain Says Stop... demonstrates the musical improvement that Dear Diary hinted at two years ago. Not forsaking seriousness, however, "Black Tattoo" is FM's version of TFK's compassionate "Look Away," and "Lost In You" showcases the worshipful side of the duo in their best element. At first glance, My Brain Says Stop... isn't a particularly profound listen, and those only hoping for another What Are You Waiting For? will be disappointed, but complexity and the same-old were never the band's goals in the first place. The sooner the listener accepts the music and lyrical direction, the sooner they can let loose and bask in FM Static's entirely enjoyable fourth effort. - Roger Gelwicks, 4/3/11