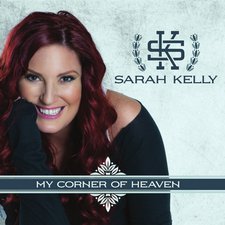 Sarah Kelly
My Corner of Heaven

While the current Gotee Records artist roster now boasts a mere four artists, there was a time, not so long ago, when it seemed as if one out of every two or three acts who were somebody in the rock, pop, hip-hop or worship arenas were signed to the label. Indeed, by the time of its tenth anniversary in 2004, the burgeoning imprint had no fewer than five gold albums under its belt, its artists were placing singles on both the Christian and Billboard mainstream charts seemingly at will, and nearly everyone who spoke of its unusually eclectic assortment of performers did so with a combination of respect and awe afforded to only a select few of co-founder Toby McKeehan's contemporaries.

It was into this heady, rarified air that Illinois native Sarah Kelly dropped her sterling debut offering, Take Me Away, some ten years ago. Her propensity for melodic, bracing rock with just the right amount of pop sheen immediately caught on with critics and the public at large, pulling down a Grammy nomination in the Rock Gospel category in the process. The follow-on effort, Where the Past Meets Today, hit the streets two years later and netted a second Grammy nod in the same category. Since that time, Kelly has tempered her sound a bit, releasing the decidedly softer-toned Born to Worship in 2008 and the rock/worship hybrid, Midnight Sun, in 2010.

As it turns out, roughly half of the new project could be viewed as a sort of companion piece to Sun. On the rock side of the coin, the lead off song, "Unescapable," helps cement the long-standing comparisons to Alanis Morissette, while the equally rocking follow-on cut, "Legends (The Real You)," would almost surely have given mid-'80s Heart power ballads like "What About Love" and "Alone" a run for their money during the Reagan years. At the softer end of the spectrum, entries like "You Know Me" highlight Kelly's undeniable proficiency with purely pop material. And the Janis Joplin-esque vocals on the absolutely consummate piano-driven "Just As You Please" add just the right amount of roughness to the piece's otherwise hushed, reverent tones - the likes of which should be required listening for any artist seeking to craft a worship-oriented release.

Elsewhere, though, the results aren't nearly quite so impressive. The borderline-bombastic remake of "Amazing Grace" comes across as more grandiose than grand and pales noticeably compared to the more atmospheric (and engaging) version found on Born to Worship. Likewise, the electronic, dance-friendly remix of "Take Me Away," with its semi-jarring blips and bleeps, retains little of the grit and longing that rendered the much-better original so infectious. Kelly fills out the remainder of the proceedings with a trio of songs performed by students at the Houston-based school of music she started with her husband, Swedish music producer Jonas Ekman. While the concept is certainly noble enough and gives these budding performers a platform for their work they might not otherwise have, the cuts themselves - a pair of modern worship pieces and a breezy neo-soul number - find Kelly virtually relegated to guest-star status on her own album, leave little in the way of lasting impression, and ultimately wind up fitting in incongruously with the rest of the record.

That being said, Kelly's voice remains as powerful and distinctive as ever, and the strongest material on Heaven easily stands toe to toe with any she's produced to date. Just as importantly, while the rock and worship-oriented tracks on Midnight Sun sat awkwardly alongside one another, almost as if stitched together at the last minute, the harder and softer halves of the new album - even with the student-led compositions and remixes factored into the equation - dovetail seamlessly into a whole that, by and large, is greater than the sum of its seemingly disparate parts. My Corner of Heaven isn't nearly Kelly's most convincing effort and, truth be told, would probably have fared better as an EP, with the remakes and student-driven cuts excised. But, even as it alternately rises and falls, the new record, more than anything else, points to a star whose talent remains undimmed with the passing of time and whose best and most memorable work almost certainly lies ahead of her.

Sarah Kelly is back with a new Kickstarter-funded album in My Corner of Heaven, a record that easily is a soundtrack to life for Sarah in this current chapter. With Sarah wanting to focus more on her own Sarah Kelly Music School and its students and not tour like she used to, it's not a huge surprise that 3 out of the 11 songs on the new record are not only not her own, but she only provides background support on them. Furthermore, with the 10th anniversary of Take Me Away this year, a dance remix of the title track is dropped into the middle of the new album, as well as a re-recorded version of her take on "Amazing Grace." This brings the count of brand new Sarah Kelly offerings to a total of 6. The new cuts are excellent, but with it being four years since her last full-length, My Corner of Heaven is a bittersweet offering. The initial promise of this being "best album by far" (as her Kickstarter pitch stated) isn't quite realized, and the focus on her students and some retrospective cuts reveals where her current treasures lie. As either an EP of just the new tracks, My Corner of Heaven would have been just right (or at least calling this "Sarah Kelly & Friends" to be fair), but as it is, My Corner of Heaven, although formed with the purest of intentions, is likely to leave some fans scratching their heads or feeling a little shortchanged. Its lack of cohesive of flow keeps it feeling like a playlist on shuffle, too. Still, with all this known ahead of time, Sarah's fans still won't want to miss some of the lovely new songs, especially "Just As You Please," "You Know Me," "Unescapable" and the title track. - Review date: 9/22/14, John DiBiase