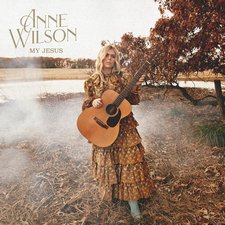 
Anne Wilson is an exciting new artist on Capitol CMG making her full-length album debut on the heels of a surprise hit song in 2021, "My Jesus." The song was written in the wake of a family tragedy, and Anne is sensing a calling to aim her encouragement/ministry specifically "to those who've lost someone and are hurting." The album is also titled My Jesus and is a veritable smorgasbord of styles with the country genre as its anchor. There's a strong current of gothic country, with a smattering of modern country and radio-ready pop ballads to keep things fresh. For those unfamiliar (as I was), gothic country is also known as gothic Americana, southern gothic, or simply dark country. The sound sprung forth in the late 90s and early 00s and mixes elements of blues, southern literature, and religious imagery with frequent topics featuring criminal behavior, death, ghosts, family, and the devil. Admirably, on this album, there is something for any type of music listener without it feeling too scattered. In short, this is a modern album that functions well, piecemeal song-to-song for radio and streaming purposes, but maintains a common enough thread to work as a set of cohesive songs.

The highlights to my ears fall primarily in the first half, with "Scatter" and "Devil" nailing the defiant gothic-country sound to perfection. "My Jesus" offers heartfelt sentiments to the weary to "let my Jesus change your life," and "Hey Girl" comes off as a playful earworm calling women to see themselves as God does. Additionally, "Sunday Sermon" (the second radio single), "This House," and "God Thing" set my toes-a-tappin' with feel-good vibes. In fact, it's a tough call, but the latter is this reviewer's favorite overall tune at the time of this writing.

Also, it's worth noting that there are two guest features among the setlist---country star Hillary Scott of Lady A joins Wilson on the shuffle-step song "Mamas," and the incomparable Crowder joins on a second version of "My Jesus" to close the album. Both duets are well-done, if not forgettable, with Crowder's contribution standing out the most. Lastly, while the second half of the album does fall off in energy, it does contain highlight "Something About that Name," while the trembling vocals of Wilson shine on "Closer to God."

The main criticisms of the album as a whole are small ones. Namely, its length at fifteen tracks, lyrics that retread familiar ground, and some redundancies in the musical palate. The easy cuts for me would have been "Mansions," "That's What We Need," and Crowder's version of "My Jesus." It's not that the latter is poorly done by any stretch; it doesn't allow the album to finish on the stronger note that "Closer to God" would have proffered. Lastly, the overreliance on the same big-pop drum backbeat contributed to the redundancies in some of the songs, so a different rhythm choice would have helped set certain songs apart. Again, small potatoes on the complaints--this is a good album and an excellent start for the twenty-year-old Wilson.

My Jesus, the record, is catchy, infectious, and uplifting. This would likely appeal to fans of artists like Ellie Holcomb, We The Kingdom, Crowder, Zach Williams, and CAIN--which coincidently (and tangentially) would make a terrific tour. In a word---this is polished and primed to be huge on Christian AND Country radio stations should Wilson decide to go that route. Anne Wilson has the sound, aesthetic, and hit song in "My Jesus," now the only question is, "how high can she fly" moving forward? By all accounts, this reviewer says the sky's the limit, and the future of Christian/Country music looks bright.