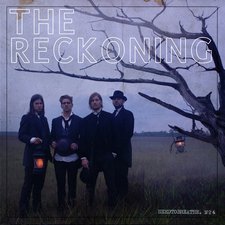 With their fusion of catchy pop-rock and alt-country charm, it didn't take long for NEEDTOBREATHE to establish themselves as one of the most exciting crossover acts to come along in years. The artistry of their past releases, from the alternative rock style of Daylight to the eclectic Southern flavor of The Outsiders, have earned critical acclaim and a number of loyal followers. This summer, a high profile stint on Taylor Swift's 2011 tour propelled the band to even greater exposure, taking their dynamic live show to sold-out arenas and thousands of potential new fans. Is it a fairy tale even Ms. Swift couldn't dream up for four boys from small-town South Carolina? No, perhaps it's more accurate to say it's the well-earned result of hard work and dedication to their art.

All of this has built a great deal of anticipation for their fourth studio album, The Reckoning. It's always hard to predict where NEEDTOBREATHE will go next; they pull off the classic arena rock sound so well, but a new crowd from the country scene and the current trendiness of banjo-toting alt-folk bands suggest the potential for a stronger Americana influence. It turns out that The Reckoning embraces both sides of the band, emphasizing Bear and Bo Rhinehart's emotional songwriting while trying out new sounds and musical approaches. Like the spooky Southern gothic atmosphere of the cover art, The Reckoning is a mellower, slightly darker take on classic NEEDTOBREATHE, evoking themes of wandering and longing in a timeless sound.

While their past albums usually opened in an upbeat way, "Oohs and Ahhs" kickstarts the record with gritty, brooding guitar riff, a far cry from "The Outsiders'" clap-along banjo jam. The soul and swagger in Bear Rhinehart's voice and lyrical imagery twist around a powerful rock riff, while the swirling acoustic plucking, fuzzy bridge, and mix of minor key piano and brass combine to make one of the coolest sounding tracks to enter their catalog.

From there, The Reckoning boasts a number of gems. "White Fences" has a jangly, back porch vibe that evokes a little bit of The Outsiders' charm, then gives way to "Drive All Night," the kind of restless epic sound that makes the perfect lonely soundtrack to "follow the headlights down" into the darkness. "A Place Only You Can Go" has a haunting, sea-faring feel, "Able" welcomes some gospel influences with slide guitar and a church choir, and the stomp and twang of "Devil's Been Talkin'" is pure, vintage NEEDTOBREATHE. On the other side of their sound are tracks like "The Reckoning" and "Keep Your Eyes Open" that evoke the spacious arena rock style familiar to their debut Daylight. The chant-along hooks, heavy drums, and open guitar feel more like U2 or Arcade Fire than their Americana tendencies, and the intriguing blend reinforces their unique musical identity.

As a whole, this is a strong album that doesn't retread past material or stick to a formula, yet something feels a little off on the first listen or two. Perhaps it's the darker, subdued feel overall that is unsettling at first, or maybe it's the lack of standout upbeat songs like "Prisoner" and "Girl Named Tennessee" that so quickly became fan favorites. Still, it's the sort of record that grows with you over time, as the quality musicianship and songwriting that earned their following continues to be as impressive as ever. It's also admirable that they continue to push their sound and try new things, and the somber mood suits them for the coming autumn days.

The Reckoning is an intriguing, solid addition to the catalog, even if it doesn't quite have the immediate spark of some of their past work. Time will tell where it falls on the spectrum of their music, but for now, it is one worth the time to fully discover, whether as a newcomer or long-time listener.

With three impressive albums already under their belt, Needtobreathe returns with The Reckoning, adding 14 more solid entries into their catalog. The true uniqueness in Needtobreathe's music comes from lead singer Bear Rineheart's signature vocal style. With The Reckoning, Bear consistently impresses, be it with emotional highs that evolve into growls or a falsetto that we have not heard much of before. Like the past albums, each piece borrows heavily from southern influences with a firm rock foundation. That's not to say these songs sound like a retreading of familiar territory, quite the opposite, in fact. The diversity of sounds found here is astounding, but never stray so far that it seems intangible. Even in the opening track, "Ooh's and Ahh's," the sound shifts from a soft, acoustic setting to a hard rock anthem. The two pre-release singles, "Slumber" and " Drive All Night" bring a lot of energy and a significant pop quality to them. Things are slowed down quite frequently on this album, as well. Songs like "A Place Only You Can Go," "Able," "Wanted Man," and "Learn to Love" feature entire songs that stay fairly mellow throughout. Truly, every track here has a uniqueness and memorable quality about it. It may take some listeners a few spins before it settles in, but once it does it's arguably Needtobreathe's finest work to date. - Jerold Wallace, 9/21/11