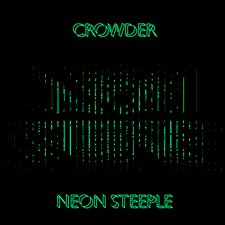 There is a certain kind of mythos that surrounds David Crowder, lead singer of the late David Crowder*Band. His music is considered methodical, philosophical, theological and many other "icals." For many DC*B fans, it felt like a funeral when the band brought their story to an end. However, it was a short intermission of sorts and Crowder has risen up from the ashes with his latest release, Neon Steeple.

The album opens with the short but effective "Neon Intro." It sets the stage for what feels like a melancholic reflection but is picked up with folk-electronica "My Beloved." Those who have come to love Crowder's knack for mixing genres will most definitely also love "Hands of Love," "Ain't No Grave," and "You Are." It will move listeners to want to do the boom-chuck-boom-chuck with glow sticks.

Fans may be familiar already with his previously released singles "This I Know" and "I Am." The former is fantastic and easily accepted while the latter took a few listens to truly sink in - and for a complex reason. On DCB's 2009 release, Church Music, Crowder made mention of the double meaning and word play in the song "Can I Lie Here" (follow this link to know what I'm talking about.) With the possible double-meaning of referencing God as "I Am," it gives even more depth to the lyrics, "I am, holding on to You. I am, holding on to You. In the middle of the storm I am holding on, I am." This is hypothetical of course, but knowing the quirkiness and complexity of David Crowder art makes all hypothetic thoughts and theories most welcome.

Without hesitation, "Come As You Are" may be one of the greatest songs the artist has produced to date. It is a clear call to the sinner in all of us to come as we are to stand before God as Crowder sings, "So lay down your burdens, lay down your shame O wanderer you're not too far." Vocally, it seems as if he not only is exhorting the listener but to himself as well - preaching the gospel to others and to himself. It is simply one of his greatest compositions and is one of the clearest representations of the grace of Christ.

For fans that were looking forward to more folk/bluegrass/acoustic recordings, you will have your fill with "Lift Your Head Weary Sinner (Chains)," "Jesus Is Calling," and "My Sweet Lord." They are all musically entrancing and fresh to their very core.

The album closes with the "Steeple Outro" and it brings a solid end to the album with a content and resolved sound. It most definitely feels like the listener traveled the life of a sinner who has been saved and redeemed - from neon to steeple. Those who like creativity should take special note of the thought that was put into the intro and outro - it's so simple yet so refined.

There are many that might assume that this is another "worship" album from the legendary artist, but that's simply not the case. That is not to say that it doesn't have a feeling of sacredness. Overall, the album is more like an in-depth look at the soul - the humanity, the redemption and the regenerated. Don't fret, worship leaders; you may have a few songs that can be tightly squeezed into a creative worship set - but if the goal is just to find a new song to sing, you might miss the point of this very artful work. Without a doubt, Crowder has returned to the forefront of the music scene with songs of hope, grace, and a whole lot of transparency. David Crowder, it's good to have you back and with much respect, better than ever.

Since the 2012 swan song of the David Crowder*Band, fans of the band have learned that both David Crowder as well as *Band (or, more accurately, The Digital Age) would be continuing to release music apart from each other. 2013 saw the major label debut from the latter, and 2014 begins Crowder's solo tenure with longtime DC*B label, sixstepsrecords. Neon Steeple is a worship album like only David Crowder can do it, and it's one that DC*B fans will feel right at home listening to (I mean, who else could make an album that's labeled as "folk/worship/bluegrass/electronic" and is also good?). Now, when I initially listened to the debut single "I Am," I was a little disappointed, as it made me wonder if Crowder was going the way of the radio, but in the context of the album, it fits really well, and it is rather unique for a radio song. It's safe to say that there are a few songs on Neon Steeple that are primed for airplay, but there's arguably more that will appeal to fans of DC*B's deeper or more unorthodox material. A sure highlight of the album is "Lift Your Head Weary Sinner (Chains)," with its legitimate bluegrass sound and "slave song" beat. I'm also a big fan of the Hank Williams, Sr.-penned "Jesus Is Calling," as well as "Come Alive" (with its absolute flawless guitar melody), both of which would probably be classified as country a lot more than bluegrass, but they're a perfect fit for Neon Steeple nonetheless. The latter, however, also includes a very synth-heavy, dance music-laden chorus, and even features a little dubstep later in the song. You would think the idea of mixing country/bluegrass and electronic dance music would be a trainwreck, but Crowder is no stranger to experimentation, and he pulls it off amazingly with Neon Steeple. If you liked DC*B's Church Music and/or A Collision, then Neon Steeple is a no-brainer. - Review date: 5/24/14, Scott Fryberger

It is rare for an artist to label their music as something as far out of left field as "folktronica" and get away with it, but then again, what else would we expect from David Crowder? Neon Steeple brings forth some of the most creative Crowder concepts yet and excecutes it to a T (look no further than highlight "In His Hands," a lyrically ordinary worship song transformed into folktronica bliss). That said, at the risk of diminishing that concept and execution, the all-out artistry is more on the level of Remedy or Can You Hear Us than Crowder's true masterpieces as the DC*B. But that is nothing to get disappointed over. Neon Steeple is everything we could have hoped from Crowder's first endeavor apart from his former band. - 5/25/14, Mark Rice of Jesusfreakhideout.com