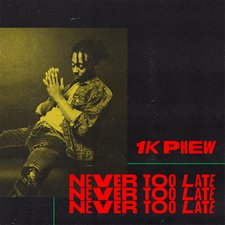 
In 2017, Reach Records - CHH's biggest record label - signed 23-year-old, Atlanta native 1K Phew. Known for his trap sensibilities, smooth delivery, pleasant vocals and terrific energetic production, 1K rose in popularity with his fun and engaging mixtapes, Sunday Night (2015) and Life (2016), which caught the eye of Reach Records. Never Too Late was the third mixtape that 1K released independently; when he was signed to Reach Records, it was re-released with an additional 3 tracks. The second half of Never Too Late displays an plethora of catchy melodies, stellar production, witty lyrics and overall positive messages, but the first half fails with sometimes pointless verses, confused messages and choruses that are indeed catchy but are very repetitive. While the terrific production and catchy choruses often cloak these flaws, they are nevertheless there; it took me many repeated listens and repeated readings of the lyrics to find these flaws.

Never Too Late starts off poorly with "Load of Me," which finds 1K Phew bragging ("Get a load of me/ I'm just dripping sauce in places where I'm supposed to be/ We just making movies people wanna go see/Its lit off in the building, feeling like an OG/ Ha, why don't you get a load of me?"). The lyrics here are tough to decipher, for example, who is making movies? Why? Yes, bragging is a big part of Hip-Hop in general, but "Load of Me" is just a little too much. A couple songs later, "Jumping Jacks" hits the ears with more bragging about work and more confusing lyrics in the chorus ("They go tada [tada]/Walk like Lady Gaga [Gaga?]/But I can't bring no dolla [dolla?]/What we doing?/Walk in your habitat/Make it do jumping jacks/Walk in your habitat/Make it do jumping jacks/Gotta go Bathing Ape/Gotta go Shake N Bake"). While the next song, "Petco," is one the best songs musically, like the songs before it, it suffers lyrically. Also, something to point out, if I had a dollar for every time 1K said "hey" throughout the record, I'd have an extra hundred bucks in my pocket. It's not a huge deal but it's worth mentioning.

The album picks up greatly when "TV" rolls in with terrific verses, great production and clever puns ("We're so well informed, no, muscled up like Arnold") and an above average guest verse from label-mate Lecrae. Although the song is very well done, the chorus does leave much to be desired from an otherwise great song. With the next couple songs, we are met with heartfelt lyrics of being more than what society imposes on you; in "Never Too Late" it's how far he has come since his troubling past and in "Long Way," he sings "Look, all my old friends probably can't recognize me no more/ I was in the den, now I'm eatin' good, kept me at the top floor/ Somebody tell me the score/'Cause we got blessings in store/Let 'em fall, let 'em pour". The tempo picks up again with "Bet Not Ever," arguably the best song on the release, with relatable topics being covered such as jobs, staying positive, remaining responsible when you have these responsibilities, and of course, bragging on his Lord ("One Sixteen, if they askin' 'bout the faith walk/I don't say a word to my problems, let the faith talk")

1K Phew's Never Too Late release is not a perfect work of art by any means -- there are flaws aplenty. However, with trap growing ever more popular within the Hip-Hop community, rarely have I seen it done so naturally. Many do it just because it's what's popular and many times it can sound forced. 1K Phew, on the other hand, does it with finesse and has singlehandedly made me love this sub-genre in Hip-Hop that is so popular now. With that said, Never Too Late is not original, and this style is one of the most popular within the Hip-Hop genre, so do not expect the originality or immensely artistic brilliance of the master works Crooked by Propaganda and Sho Baraka's The Narrative, because that's not what this is trying to be. What Never Too Late is trying to be is relatable, fun, and at times heartwarming. It's the sound of an artist trying to hone his craft, showing so much promise. I look forward to what 1K Phew has to offer in his career and is definitely an artist to keep your eye on.